For the last few years I have taken a late summer trip to a remote lake in Ontario, Canada---to slay the mighty walleye.  Well, not really slay them as most of our fishing is “catch and release.”  We keep a couple of small fish, under16 inches, to coat with Shore Lunch© and throw them in the hot bacon oil for a few minutes.  In another skillet, a can of potatoes is frying away and then come the eggs.  The coffee is hot and black.  It adds up to a day’s worth of fat and cholesterol; however, it is one of those bonding experiences that only comes around once per year.  Included in this experience: catching between 300-400 fish, drinking coffee from a Thermos© jug, plugging along in an aluminum boat, belching without saying excuse me, napping in the sun while waiting for “a bite” and never hearing a vehicle, eating salami sandwiches (and belching some more), having a cool one on the deck, ambling over to the small lodge for a magnificent evening meal including fresh homemade pie (talk about more fat and calories), watching the sun set over the lake with vibrant colors, hearing the loons chatter to each other, and sometimes catching a dazzling display of northern lights.  The quietness of the cool nights is indescribable.


My bonding partner is a Ph.D. biologist who knows much about plants and animals living in the water.  His favorite trick is to pluck a scale off a large fish, pull out his hand lens (people other than geologists carry these gadgets), count the growth rings, and give me an age for the fish.  Pretty nifty.  I also quiz him about all of the water plants, those things that back in my Kansas home are generally called “moss.”  I have learned much about the aquatic world in my 16 years of bonding.


The geology in this part of the world has two classes of rocks/outcrops: 1) Precambrian igneous and metamorphic rocks; 2) Quaternary glacial crud covering most of the landscape.  However, down in the river valley that holds the natural lake (about 26 miles long) one is able to observe results of glacial scouring.  In fact, the river follows a channel that was “dug out” by the glacier.  It is not a smooth channel as noted by the numerous rocks sticking above the water’s surface and then plunging down 60-80 feet in a short distance.  The best fishing seems to be locating the “humps” where the rocks do not break the surface but where small baitfish congregate and therefore attract large northern pike (40-inch range) and walleye (up to 31 inches).
At any rate, our conversations in the boat are not always piscatorial but tend towards nature and the environment---what would one expect from a couple of ole academic scientists.  One of my contributions to the discussions has been to explain the formation of a small island in the lake--see photos above. I had been studying the island every time we were near the place since the fishing was exceptional off one end.  And then it hit me—from the back recesses of my mind and my junior-year course in geomorphology I realized the island was a Roche moutonnée.  So, my friend, which way do you think the glacier was moving?  Let me explain how I know the answer (hoping my answer was at least as impressive as the scale aging of fish).  Mosey the boat over by that smooth end of the island and note the smooth but striated surface—but don’t bend the prop in the shallow water.  Now, on the other end where we catch the fish and the water is deeper note the rough surface of the island and the scattered pieces of the bed rock.  The glacier came from “that-a-way” (the shallow end) and smoothed off the knob and left the striations.  However, as it crawled over the knob and begin to descend it plucked off pieces of the bedrock leaving behind the rough surface of the leeward side.  Neat, huh?  Some geologists restrict the term Roche moutonnée to large scale features and term the small features like this island “stoss and lee.”  Personally, I like the French term better. 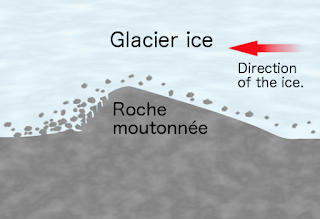 Cartoon showing formation of a Roche moutonnée or stoss and lee.  Public Domain sketch created by Jasmin Ros.
Unfortunately, that was about the extent of exciting geology around the lake.  We did observe smaller lakes draining into the large lake that were kettles, basins created by large hunks of ice breaking off the main glacier and then melting.  I would have liked him to have observed the Matterhorn, an erosional glacial feature, as I did on a full moon night in Switzerland.  However, I suppose that would have started him on his stories about spending a summer cruising up the Volga River in the USSR studying plankton, or perhaps relaying information about flying (as a pilot) his research crew up to Hudson Bay (and seeing two wolverines as a bonus).


If readers want to view a large-scale, mountain Roche moutonnée visit one of my favorite Bogs, In the Company of Plants and Rocks, at www.plantsandrocks.blogspot.com (Oct. 5 post).


I cannot even imagine where I would be today were it not for that handful of friends who have given me a heart full of joy. Let's face it, friends make life a lot more fun.          Charles R. Swindoll