Creedite [Ca3SO4Al2F8(OH)2-2H20] is a rather uncommon, hydroxyhalide mineral (minerals with a Halide Group anion—chlorine, fluorine, bromine, iodine--- plus the hydroxide radical) that has a Colorado mine as its type locality.  Creedite is often the result of fluorite oxidation so it is not surprising that the mineral was first discovered (1916) and described from the fluorite mine at Wheel Gap near Creede, Colorado; hence, it picked up its name from the topographic quadrangle. The creedite crystals are found in a fluorite-barite vein in a Tertiary lava flow intermixed with tuffs of predominantly rhyolitic and quartz latitic composition (Eckel and others, 1997).

Most creedite specimens that I have seen occur as acicular, prismatic and radiating crystals although some are granular aggregates while others form as druses (Monoclinic Crystal System). The most colorful of the specimens are purple to violet or orange in color although many are colorless to white; some blades are included with various minerals. The acicular crystals are vitreous and transparent to translucent and all have a white streak and are quite brittle.  Crystals are fairly soft but determining that property is somewhat difficult (~4.0 Mohs).  Creedite seems restricted to areas where hydrothermal solutions were rich in fluorine and later oxidation of fluorite produced the mineral.  I could not locate information on the “coloring” of creedite.  However, I presume it is allochromatic and small amounts of impurities will impart the color. 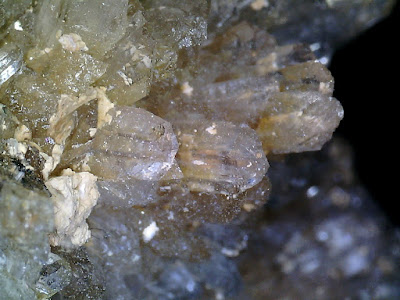 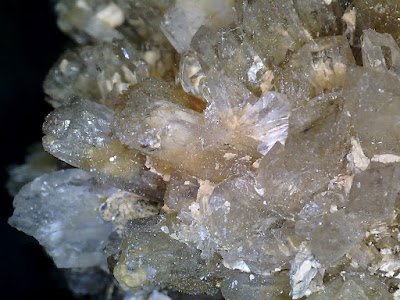 I have two creedite specimens marked Navidad Mine, Abasolo, Rodeo, Mun. de Rodeo, Durango, Mexico, and two more specimens collected from the Rodeo Mine in the same general vicinity.  In fact, MinDat.com indicates that the correct location name is the Navidad Mine and “Mina Abasolo” and “Mina Rodeo” are “misnomers derived from the nearest village and municipality.”  The mine(s) produce large quantities of industrial-grade fluorite derived from a fluorine-rich hydrothermal solution.  After the formation of the fluorite into veins the area was faulted and brecciated and some created vugs then held the peach-orange, radial groups of creedite (Megaw, 2013).  At times a cube or two of fluorite are intermixed with the creedite blades and some sort of an orange-peach clay mineral actually held the creedite groupings and at times is included within the creedite crystals.
I also have a beautiful cluster of light purple, prismatic creedite crystals surrounded by black botryoidal goethite from the famous mines at Santa Eulalia District, Mun. de Aquiles Serdán, Chihuahua, Mexico.  Unlike the Navidad mines, the Santa Eulalia mines were sulfide producers: lead, zinc and silver with minor tin and copper and a few others.  Also unlike Navidad, Santa Eulalia minerals are the result of dissolution-precipitation in host Cretaceous limestone beds or skarns (Carbonate Replacement Body) with fluids from nearby Tertiary intrusive rocks.  The several stages of fluorite depositional events produce a variety of crystal shapes and colors.  The creedite then is a result of later oxidation, by meteoric waters, of the fluorite.  Santa Eulalia has been one of Mexico’s chief producers of silver, lead and zinc.  Above from Megaw, 1990. 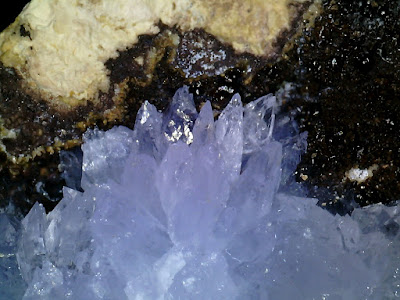 The most interesting specimen of creedite in my collection was picked up at the recent Pikes Peak Gem and Mineral Show.  Although creedite was first discovered/named from a Colorado mine, the mineral is not all that common in mines of the state.  In fact, the 1997 edition of Minerals of Colorado (Eckel and others) did not list a single locality for creedite other than the original discovery site.  Therefore, it was of great interest that in 2001several creedite specimens were found in the Cresson Pit near Victor in the Cripple Creek Mining District. From what I understand, a Colorado mineral dealer was able to obtain much/most of the limited supply and offered specimens for sale at the 2003 Denver Show.  I was not living in Colorado at that time but have not seen Cripple Creek creedite for sale at other shows; therefore, I was happy to obtain this specimen. Carnein and Bartos (2005) and Cook (2008) described the Cripple Creek occurrence in the Mineralogical Record and Rocks and Minerals: “Specimens consisted of radiating groups of colorless/white, bluish-purple, lavender, and pinkish-purple crystals to 1 cm associated with blue, white, and yellow celestine, botryoidal pink rhodochrosite, gearksutite, and pyrite.” 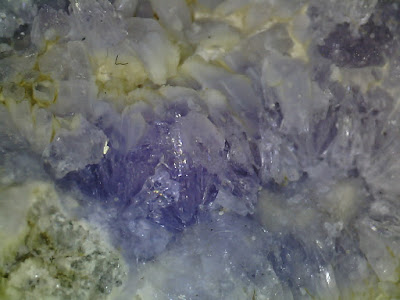 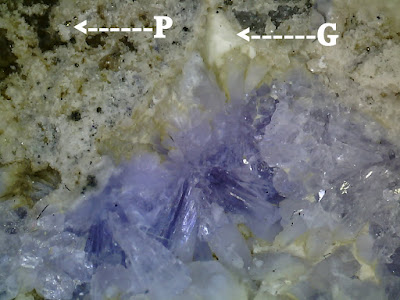 The specimen in my collection has nice sprays of mostly light purple to clear crystals of creedite, very tiny cubes of scattered pyrite, white massive gearksutite, a few micro cubes of clear fluorite, perhaps some tiny white crude crystals of celestine, and perhaps other minerals including barite.  However, I could not locate rhodochrosite as noted in the original find and description. 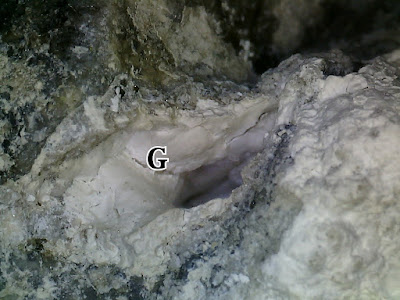 The most interesting mineral, other than the creedite, is gearksutite, a fairly rare hydroxyhalide—a complex alumino-fluoride: Ca[Al(F,OH)5(H2O)].  Most descriptions of gearksutite describe it as being a dull, earthy, white-looking, soft (2.0 Mohs) chalk-like mineral often forming nodules.  However, 1) under SEM magnification the mineral is composed of minute fibers that actually are lath-shaped crystals (Mineral Data Publishing, 2016); 2) it also occurs as minute, vitreous crystalline “balls” that sometimes show radiating crystals. 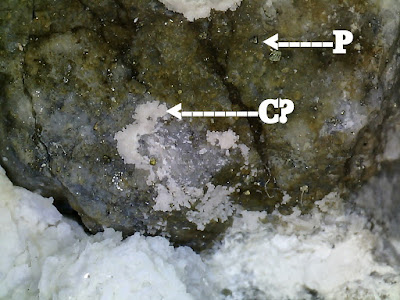 As best that I can determine (information below from MinDat.com), gearksutite forms: 1) as an alteration product of cryolite [Na3(AlF6)] or pachnolite [NaCa(AlF6)-H2O] or fluorite [CaF2]; 2) from low temperature, late stage hydrothermal solutions rich in fluorine; 3) as “wall rock” alteration, at the type locality; 4) from slag rich in halogens at some locations in Austria; 5) from an alumino-fluoride breccia pipe in Virginia; 6) replacing an elpasolite [NaK2(AlF6)] + weberite [Na2Mg(AlF6)F] mixture which was a replacement product of primary prosopite [CaAl2(F,OH)8]; and in Kazakhstan, 7) during interaction of HF (produced by pyrite oxidation in fluorite matrix) with concretions of [of the aluminum clay minerals] allophane or caoline [kaolinite].

What all this indicates to me is that gearksutite is a late stage mineral that can form in a number of fluorine-rich environments, is fairly rare and tough to identify, and whose actual mode of formation is way above my pay grade.  Never-the-less, I am happy to have acquired the specimen.
I thank Professor Bob Carnein (a real mineralogist) from the Lake George Gem and Mineral Club for his information about the Cresson Pit specimens.  Additional information about some aspects of the Cresson Pit appear in an October 2014 Posting on the Carlton Tunnel and December 2015 Posting on Cripple Creek Scripophily.  And, Cook (2008) pointed out that in “summer 2007, narrow vugs lined with small colorless to pale purple creedite crystals were found in the Henderson molybdenum mine, Clear Creek County” Colorado.
REFERENCES CITED

Mineral Data Publishing, 2016, Gearksutite:  www.HandbookofMineralogy.com.
I write to understand my circumstances, to sort out the confusion of reality, to exorcise my demons. But most of all, I write because I love it!
Isabel Allende
Posted by Mike at 8:07 PM No comments: