The shows at Kino, the ex-Tucson Electric Park shows, have changed in the last couple of years.  At one time the venue was stacked with small dealers selling a wide variety of interesting rocks and minerals.  Most of these mom & pop dealers were set up on the soccer fields; however, the fields are now off limits and most of these small dealers have moved to the 22nd Street venue.  The remaining dealers, and there are many, still peddle a wide variety of goods including Bob Marley reggae shirts, “Persian” rugs, welded steel animals and “big” rocks with quartz crystals or azurite.  There also are plenty of beads and amethyst cathedrals.  I am always amazed at how many tens/hundreds of thousands of beads are for sale each year in Tucson.
There are some decent vendors with minerals for sale but it seems that Deccan Plateau zeolites were the most common.  I was impressed with the numerous vendors selling lapidary supplies and equipment.  I am not interested in such, but the prices seemed decent.  One thing that I did miss was the “golf cart” hauling visitors from the parking lots to the show venues---it seemed to disappear this year.


I did locate a small dealer from Kansas (my original home state) willing to “talk” minerals (and Jayhawks) and tried to convince him to bring his wares to the CSMS Show in June.  At any rate, he had a small selection of “half-price” specimens so I nabbed a couple.  One was a carbonate that was not in my vocabulary—Kutnohorite [Ca(Mn,Mg,Fe)(CO3)2].  Since the purchase I have been reading about it, and examining such under the scope.  It seems a fairly rare mineral, a calcium magnesium carbonate related to dolomite [CaMg(CO3)2], and in a series with ankerite [CaFe(CO3)2]. 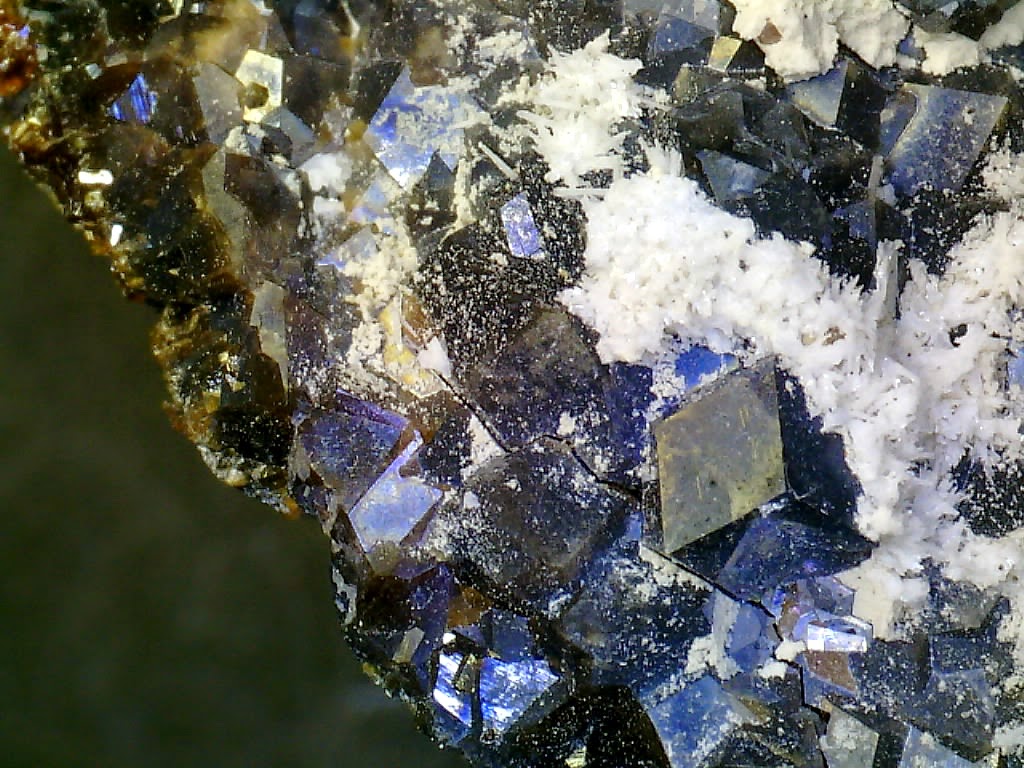 Most of the time kutnohorite consists of aggregates of tiny bladed crystals that are brown to pale pink or pale white in color. The pink hue increases as the magnesium increases while iron imparts a light brown color. Most of the time the mineral is quite dull or earthy in luster, somewhat translucent, and has a hardness of ~3.5-4.0 (Mohs). When fractured, the end result is a number of tiny conchoidal pieces.

My specimen came from the N’Chwaning II Mine in the Kalahari Manganese Field, where the manganese deposits are in the Hotazel Formation of Proterozoic age (Precambrian).  This is largest land-based sedimentary manganese deposits in the world, perhaps covering ~425 sq. miles. The ore has been subjected to hydrothermal alteration (temperatures up to 450°C) and metamorphism and is rich in braunite, bixbyite, hausmannite, marokite and hematite together with minor amounts of calcite. Andradite and barite are common gangue minerals. Additional minor minerals include  tephroite and rhodochrosite as well as aegirine (http://wwwu.edu.uni-klu.ac.at).  The origin of the giant manganese deposits has been debated for many years. “Proposed models cover a diverse spectrum of genetic processes, from large-scale epigenetic replacement mechanisms, to submarine volcanogenic-exhalative activity, to purely chemical sedimentation whereby the influence of volcanism is of reduced significance” (Tsikos and Moore, 2006).

The Kalahari Manganese Field, Northern Cape Province, South Africa, is the world’s most prolific producer of manganese. This mining region has produced some of the world’s finest rhodochrosite and hematite, as well as the finest ettringite, sturmanite, olmiite, sugilite, inesite, hausmannite, and thaumasite. Two of these mines (Wessels and N’Chwaning II) are together type localities for 19 species, including diegogattaite, wesselsite, lavinskyite, manganvesuvianite, marshallsussmanite, and sturmanite (www.mineralspecies.com).

Tsikos, H. and J.M. Moore, 2006, The chemostratigraphy of a Paleoproterozoic MnF- BIF succession -the Voelwater Subgroup of the Transvaal Supergroup in Griqualand West, South Africa:  South African Journal of Geology, v. 109.
Posted by Mike at 8:50 PM No comments: