The weather in Arizona is getting weird again.  In past days I have been wet/damp several times visiting outdoor shows and wading in the mud while looking for goodies at various Tucson venues.  Now the Catalina Mountains are white from a snow fall, almost reaching my camp site.  But most locals are very happy with the moisture due to a two-decade drought.

My first stop of the day was at a small venue where a dealer/organization was selling of part of Rock Currier’s collection.  Mr. Currier was a well know collector and wholesaler for over 40 years.  He also faithfully served MinDat as an advisor/manager and “expert” until his unexpected death in 2015. 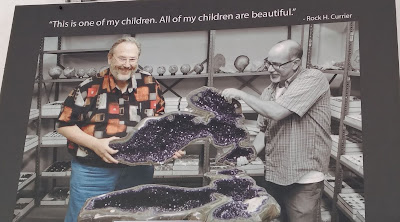 According to MinDat, Mr. Currier gave a collection of ~5000 rare/systematic minerals to the University of Arizona while retaining a personal collection of 6000+ micromounts and ~9000 other specimens.  He also uploaded about ~9000 photos to MinDat. WOW.
I knew that I could not afford any of his specimens but just wanted to take a peek at some “nice ones.”  Although many specimens had been sold before arrival, I was able to observe perhaps the finest specimen of malachite that I have ever observed.  All proceeds from this sale go to the Rock Currier Living Trust.

So now it was off to the Hotel Tucson City Center  (officially the Arizona Mineral and Fossil Show at HTCC) where I ended up wading across water from the storm!  Most of the activity at this large show is centered in the interior court yard with major displays in the lobby, ballroom and then two levels of motel rooms surrounding the center court.  It consumes the better part of a day to visit each vendor, many of whom have been in the same/similar location for years.


In addition, there are additional vendors along Granada Ave. near the motel.


My major find at the City Center was a specimen of wulfenite collected from the Red Cloud Mine in Arizona (La Paz County, southwest), perhaps the most famous wulfenite specimen collecting locality in the U.S.  Red Cloud wulfenite has been valued by collectors for decades as “crystals from the mine were marketed worldwide by A.E. Foote as early as the 1880s” (Bladh, 2019).  In addition, the 2019 January/February issue of Rocks and Minerals ( a special show edition on wulfenite) chose a red Cloud wulfenite for their front cover; the specimen was later exhibited at the Main Show.
There have been numerous articles written about Red Cloud collectable specimens, especially in popular journals such as Rocks and Minerals, Rocks and Gems and The Mineralogical Record.  The mine did produce polymetallic ore (the most important being silver, lead and minor gold); however, Red Cloud, in recent decades, has always been known for wulfenite specimens.

According to an article on the Collectors Edge website (2019) the real impetus for collecting wulfenite at the Red Cloud was due to CSMS Charter Member Edwin Over who, working alone in 1938, produced “some of the most beautiful wulfenite specimens ever seen.”  After his discovery large numbers of collectors begin trekking to this isolated mine to try and nab some of these fantastic specimens.  Over the years ownership of the mine, via Patented Claim I presume, changed hands numerous times.  Some prospectors were successful while others failed.  Finally, in 2000 Colorado Calumet Co, Inc., owned by Bryan Lees of Collectors Edge acquired the property and began to enlarge the small open pit so that prospecting could once again start for wulfenite crystals.  The crew was able to locate “several magnificent crystal-lined fractures and pockets…that contained incredibly gemmy, brilliant, and deep orange-red wulfenite crystals…” (Collectors Edge, 2019).  Colorado Calumet Co, Inc. terminated the operation, shut down mining, reclaimed the site, and sold it in 2003.  However, I hear rumors that a pay fee site is operating on the mine dumps.  Don’t know.  For a more detailed history of collecting at Red Cloud see the article listed in References Cited. 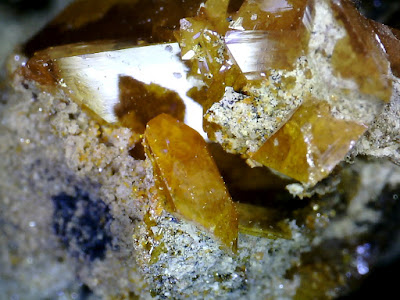 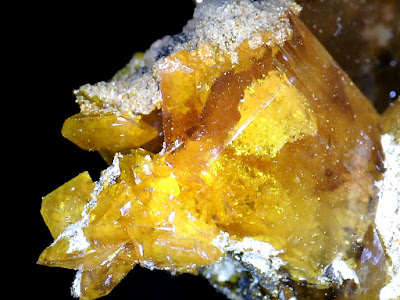 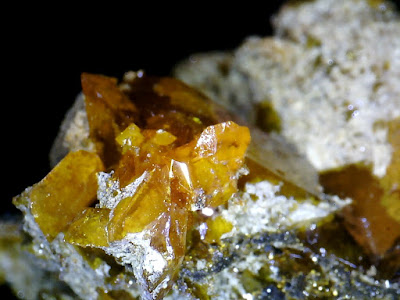 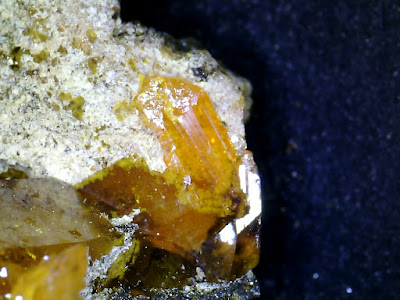 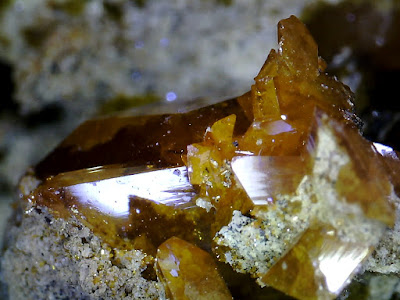 As I noted in previous postings, wulfenite is a lead molybdate, [Pb(MoO4)], famous for its common habit of forming thin tabular crystals, often transparent (but ranging to opaque), that occur in various shades of orange to red to yellow (uncommon as green or brown or blueish or black) (see Posting April 20, 2017); “butterscotch” is a common color descriptor.  There is some disagreement about the color changes although minor chromium probably acts as a red or yellow chromophore.  Crystals often have a vitreous luster and will easily reflect light as a mirror.  Others are much “duller” and have a resinous luster; some are covered by various druzes.  The streak is a nondescript white. Wulfenite is quite soft at ~3.0 (Mohs) and the crystals are brittle.  Besides the thin tabs, pyramidal (and bipyramids) and stubby crystals are common and often confuse new collectors who are used to orange or yellow tabs.

Wulfenite is a secondary mineral deposited in the oxidized zone of lead ores; it seems particularly common in the state of Arizona and Bladh (2019) noted at least 275 collecting localities.  Although collectors love isolated and single crystals, the vast majority of  wulfenite probably occurs as granular or intermixed masses.