Willard Wulff was one of the original members of the Colorado Springs Mineralogical Society, along with Lazard Cahn (Honorary President for Life), Dr. E. L. Timmons, Willet R. Willis, Ceil Graves, O. A. Reese, Leonard Sutton, George M. White, Robert D. Wilfley, Mrs. Edward L. Kernochan, Miss Billie Bennett, Arthur Roe, Edwin Over, William E. Davis, Ralph Monnell, H. E. Mathis, Frank Young, and Sigfrid Gross.  Willard was born in 1904 and seemed interested in rocks and minerals at a very young age.  In 1928 he graduated from Colorado College with a baccalaureate degree in Geological Engineering.  Like many of his Colorado Springs mineral colleagues, Willard spent time down at the office of Lazard Cahn who had “sessions with the microscope” for a small group of “students” learning about crystallography and micromounts.  Evidently Willard took a strong liking to collecting minerals via micromounts and he collected, purchased, traded and mounted hundreds (?thousands) of specimens in small cardboard boxes and later in those ubiquitous perky boxes.  Willard passed away in late 1998 and left behind a tremendous collection of micromounts, and some larger mineral specimens, that was managed by his daughter Wanda. Kristalle of Laguna Beach, California, acquired ~200 specimens from Willard’s collection of macro (cabinet) and have offered them for sale.  And on July 23rd of 2016, an estate sale sold most other specimens and equipment. 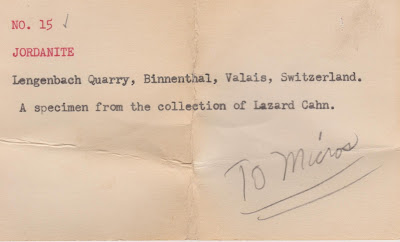 I was at the estate sale right on time and was able to purchase several micromounts, especially perky boxes filled with gold, silver and diamond crystals.  I also acquired Willards’s binocular microscope, one macro specimen and 36 specimen labels printed by Lazard Cahn! For my perspective on Lazard Cahn see the Blog Posting September 17, 2015.  For additional information on Willard’s life see his autobiography printed in March 2016 edition of the CSMS Newsletter (www.csms.us). 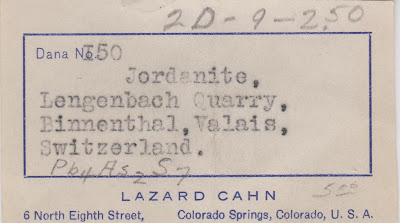 But the best part of this entire purchase was one macro specimen, jordanite, that not only has the mineral label of Willard Wulff, but the original collecting label of Lazard Cahn (located in my Cahn label collection).  I suppose this little bit of personal happiness may not resonate with some readers: however, matching a mineral specimen with a label from the famous Lazard Cahn collection is a “big deal.” 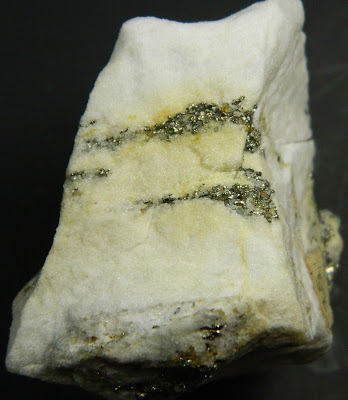 Jordanite is a rather uncommon lead antimony arsenic sulfide (Pb14(As,Sb)6S23].  A long time ago, in my beginning mineralogy course, we classified minerals with a metal ion + a semimetal (replacing part of the lead like arsenic, bismuth or antimony) + sulfur as a sulfosalt.   Arsenic is the dominant semimetal in jordanite and is in solid solution with the antimony-rich variety, geocronite.

Jordanite is a mineral that certainly was not on my radar until I saw the Wulff specimen indicating Cahn was the original owner.  Then after seeing specimen photos on the Internet, I decided that it actually was a pretty good specimen.  It was collected from the Lengenbach Quarry near Wallis, Switzerland (in the Alps), that MinDat describes as a “world famous metamorphosed sulphosalt/sulfide deposit in sugary dolomite.”  The quarry has yielded an amazing number of minerals (141) with 39 of these minerals claiming Lengenbach as their Type Locality (including jordanite).  As best that I can determine, the quarry wall rock was originally Triassic in age until metamorphosed during the late Cretaceous-Tertiary.  A later hydrothermal event produced a solution enriched in arsenic, antimony and bismuth and also deposited the sulfosalt minerals no sooner than 11 Ma (www.lengenbach.com).


Jordanite has a lead-gray to black color and produces a bright metallic luster and is very opaque.  It has an interesting conchoidal fracture, a dark brown streak and is soft (3.0 Mohs).  It belongs to the Monoclinic Crystal System and produces striated (at times) prismatic and dipyramidal crystals and sometimes forms pseudohexagonal twins.  At times the individual grains appear as globular and do not resemble any crystal shape while others are tabular. Without knowing something about locality information, jordanite would be difficult (for me) to recognize. Even then it could be easily confused with some of the other sulfosalts such as geocronite.

A second micromount picked up at the sale once belonged to Cahn but Willard traded for, and mounted, the specimen: cuprite from Ray, Arizona.  Cuprite is a simple oxide [Cu2O] that is usually found in the oxidation zone, and is a product of the oxidation of the copper primary minerals (the sulfides).
Cuprite is Isometric but produces a number of crystal forms, including cubes, octahedrons, dodecahedrons and in special cases long tubes or needles. This is an interesting specimen since there is a mixture of tiny cubes and the acicular needles.  Most cuprite is a bright red color and has been known as ruby copper; however, the crystals on my specimen are so dark red, and have such a bright vitreous luster (hence the not so good photos), that the tiny crystals almost seem black until examined under a microscope.  Other specimens of cuprite show up as globular or earthy masses.  These latter examples of cuprite then have an earthy dull luster.  The cleavage is usually conchoidal and cuprite is fairly soft at 3.5-4.0 (Mohs).  Twinning is common with penetration twins.

One particular variety of cuprite is known as chalcotrichite and is composed of fibrous mats of hair- or needle-like elongated crystals.  At  times these hair-like crystals are scattered among other cubes or octahedrons. In addition, down at Bisbee, Arizona, in the Campbell Mine (1800-2300-foot level) the chalcotrichite masses are embedded in white calcite along with some native copper and produces a lapidary stone known as campbellite—the rock is hard enough to take a nice polish.

The cuprite specimen from the Cahn-Wulff collection came from “Ray, Arizona” with no other specific locality information.  I presume it was collected at what MinDat terms the Ray Mine, Scott Mountain area,  Mineral Creek District (Ray District), Drippimg Springs Mts., Pinal Co. The Ray mines have produced, since initial production in 1911, various amounts of copper, silver, gold, zinc, lead, and molybdenum.  Initially the target mineral was silver but with better and newer mining techniques the mine began producing copper from one of those low-grade porphyry deposits and after 1955 all mining was from a giant open-pit.  So large, in fact, the Mine has consumed the original mining town of Ray.  A smelter was built at the nearby community of Hayden in 1910 and “the Copper Basin Railway transports ore from the mine to the processing facilities…which include a 27,400-ton-per-day concentrator and a 720,000-ton-per-year ﻿smelter, where more than 380 tons of copper are refined every day to a purity of 99 percent” (Arizona Daily Star, Nov 11, 2013).  Several years ago I had the opportunity to collect at the mine and came home with pieces of raw native copper and nice blue chrysocolla.  In addition, after cleaning up a “piece of copper”, I decided it was arborescent cuprite with small crystals and scattered needles.

So, it was an enjoyable estate sale and I look forward to studying my mineral acquisitions.

It's a bizarre but wonderful feeling, to arrive dead center of a target you didn't even know you were aiming for.  L.M. Bujold
Posted by Mike at 7:48 PM No comments: