VALLEY OF THE GODS, COMB RIDGE, & BLUFF WITH HAYDUKE AND THE GANG

As noted in the previous Blog Post, Forest Gump was tired and decided to return to Gumpville.  So, we pushed off from Mexican Hat headed to Bluff, Utah, along US 163—with a quick side trip to visit Valley of the Gods.  Before starting this trip, I had reread (for about the 5th time) The Monkey Wrench Gang by one of the West’s best known writers and environmentalists, Edward Abbey. 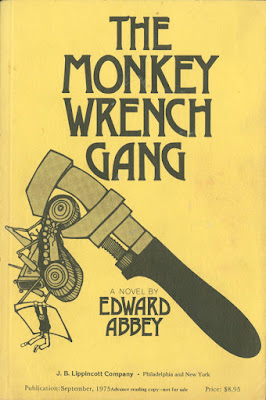 Rather than a personal account of travels in the wilderness, like perhaps my favorite book, Desert Solitaire, The Monkey Wrench Gang, is a novel set in the desert southwest around Lake Powell.  The book follows four characters (some would call them misfits in society) as they destroy federal equipment to protest destruction of the wilderness, especially the construction of Glen Canyon Dam on the Colorado River.  Misfits they may be (to many people), but by the book’s conclusion we see that Seldom Seen Smith, Hayduke, Doc and Bonnie have discovered their personal self and much about what they really want in life. Along their journey the four become more heroes than bums.  Today, most people who associate with nature and the “outdoors” would say that Hayduke was correct---Lake Powell is nothing but a large sediment trap that displays a  “bathtub ring” (from years of low water levels) and whose waters destroyed some mighty fine country.

But on with our journey.  I liked Monument Valley Tribal Park (see previous Blog Post) but perhaps thought it was a little crowded; however, the Valley of the Gods (VoG) was a wonderful, uncrowded and smaller replica. VoG is a BLM-managed parcel of land accessible by a 17 mile gravel/native loop road off US 163 (about nine miles north of Mexican Hat) connecting to UT 261 (the Goosenecks of the San Juan Road).  The road may or may not be traversed with a passenger car---your choice.  My pickup has high clearance with 4-wheel drive (the latter not needed on this trip) and I liked that choice.  Like Monument Valley, VoG has a rather flat valley floor with buttes, mesas and spires “sticking up”; all are composed of the Cedar Mesa Sandstone.  For a few months last year VoG was part of Bear’s Ears National Monument; however, along came a person in in the swamp who desires to “undo” any action of the previous administration and the VoG section of the Monument was, as Bobby Bare might sing, another monument done gone. 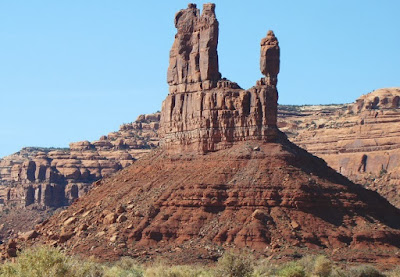 The San Juan Country of the Colorado Plateau is dominated by several small anticlinal uplifts with intervening synclinal basins.  By small I mean they do not approach the size of time-related (Laramide Orogeny) mountain ranges such as the Uinta Range but still extend tens of miles in length.  The “big” anticlinal mountains expose Precambrian rocks in the center that usually form the high peaks.  The “smaller” upwarps usually have rocks no older than Pennsylvanian in the center.  However, as noted in the previous Blog Post (see Raplee Monocline), there are some spectacular folds and “bent” rocks within the these upwarps.  The best-known upwarp features in Utah are the Monument Upwarp, the San Rafael Swell (a large anticlinal uplift with a steeply dipping and folded eastern margin termed the San Rafael Reef) and the Circle Cliffs Uplift (a north-south doubly-plunging anticline with a steeply dipping (almost vertical) eastern margin, the Waterpocket Fold).  These large upwarps “were formed by tangential compressional forces that were episodically repeated throughout the Phanerozoic [post Precambrian] and most magnificently accentuated by Laramide and younger tectonism” (Stevenson, 2000).

The Monument Upward is the largest uplift in Utah and is about 110 miles long (north to south) and 50 miles wide extending from Kayenta, Arizona to the Abajo Mountains near Blanding, Utah. Stevenson (2000) describes the upwarp as “asymmetrical with a sharply defined east face, represented by the Comb Ridge Monocline and a gradual dip west into the Henry Mountains Basin.”  Incised streams crossing the Upwarp have left behind some amazing canyons (see Goosenecks of the San Juan).   Although US 163 crosses Comb Ridge on our road to Bluff, it is better observed traveling to Natural Bridges National Monument (in the next Blog Post).

The Waterpocket Fold, the San Rafael Reef and the Comb Ridge Monocline are, as Edward Abbey noted, places so beautiful they can make a grown man break down and weep.
Comp Ridge is a spectacular wilderness feature and defines the east flank of the Monument Upwarp where numerous streams/canyons have cut into the Ridge and erode features that resemble the teeth of a comb.  These canyons also contain numerous cliff dwellings/houses and rock art constructed by Native Americans known as the Ancestral Puebloan Culture (and informally known as the Anasazi).  More on this culture in the next Blog Post.
In traveling through this area starting 50+ years ago, I can only parrot the words of Edward Abbey, Wilderness is not a luxury but a necessity of the human spirit.

As US 163 crosses Comb Ridge on the way to Bluff, the San Juan River does likewise.  In much younger days my paleo partner and I hiked to a feature along the River called Mule’s Ear Diatreme, another one of those small-scale igneous features that exposes both igneous rocks and chunks of once overlying sedimentary rocks.  It is not a prominent as Alhambra Rock and Agathla Peak noted in previous Blog Postings but is of the same origin and part of the large Navajo Volcanic Field.  My photos from that earlier trip are long gone (due to a humidity problem while living in Missouri); however, I picked up a couple or really nice views from credited sources on the Web.


After US 163 crosses Limestone Anticline and Comb Ridge, the small town of Bluff is in view.  However, just before entering town is the primitive Sand Island Campground on the south side of the Highway.  The camping sites seem to attract river runners and short term campers but what attracted me was a very large petroglyph panel.  The glyphs range in age from horseback riding Native Americans (post 1492 at least) to figures that were chipped out thousands of years ago. Good photos are tough to take as the sun is often very bright and reflects off the rock.  I believe the glyph rock is the Jurassic Navajo Sandstone.  The site is well worth a visit—just off the highway, easy parking, short walk, and free. 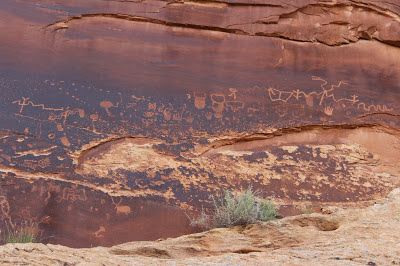 As I understand the early settlement of Bluff, a contingent of ~200 “Mormon” (Church of Latter Day Saints) settlers had been hunting a locality in southeastern Utah to colonize.  That part of the country was/is quite hard on “covered wagons” and the group was essentially stuck behind Comb Ridge and other rock barriers until they located a way through along the San Juan River and constructed Fort Bluff, and a small community.  Today visitors are able to appreciate  reconstructed early Bluff, 250-300 citizens, three commercial RV/tent campgrounds, and some mighty fine eating establishments.  We spent some enjoyable spring days there.

The San Juan River (named for Saint John the Baptist) is the major stream of the Four Corners Area (Utah, Colorado, New Mexico, Arizona) and a large tributary of the Colorado River--- now entering the Colorado in a submerged arm of Lake Powell below the Goosenecks of the San Juan.  The San Juan has its origin high in the San Juan Mountains of southwestern Colorado and wanders around the region for ~385 miles before entering the Colorado.  It evidently was flowing in the Pleistocene as it has been able to breach the Monument Upwarp and leave behind the magnificent incised canyons so easily seen at Gooseneck State Park. Around Bluff there are several terrace levels of the River and these seem to support a robust sand and gravel industry.  Usually river terraces are not that interesting; however, in wandering around and “exploring” I came across some beautiful, large, well-rounded cobbles.  So, what is interesting about a bunch of large rounded rocks?  For one, the cobbles contain other smaller rounded cobbles and pebbles and therefore are a type of sedimentary rock termed conglomerate.  Second, the cobbles are not of local origin and originated high in the San Juan Mountains of Colorado and therefore traveled over 300 miles to Bluff.  Finally, the clasts in the conglomerate are often large hunks of red chert/jasper and identify their source as the Precambrian Uncompahgre Conglomerate. I never realized that one day I would say a conglomerate is “pretty.”

The other nifty geological features at Bluff are two pinnacles called the Navajo Twins.  The caprock of the Twins is the late Jurassic Bluff Sandstone composed of windblown and cemented sand particles. The caprock then protects the underlying Wanakah Formation with its easily erodible thin-bedded siltstone and shales. Other outcrops of the Bluff Sandstone essentially surround the town as large cliffs and provide the moniker for the village.
Finally, for this post, travelers to the Bluff area might want to visit some interesting geology where it is almost guaranteed they will not encounter other groups—Recapture Pocket is a few miles east of Bluff and then north on some gravel/native roads (get a map from the Bluff tourist office).  Recapture Pocket is a mini Goblin Valley (Utah State Park with fees) where you are allowed to roam free.  The main attractions are the numerous hoodoos or goblins where a resistant sandstone is perched on top of less resistant shale/siltstone (like the Navajo Twins).  The pocket is sort of a fascinating place where I could be comfortable on a late October eve with a lawn chair, a shot of single barrel bourbon, a nice small campfire and a full moon rising.  That is until the coyotes started howling and my imagination turned to big cats! 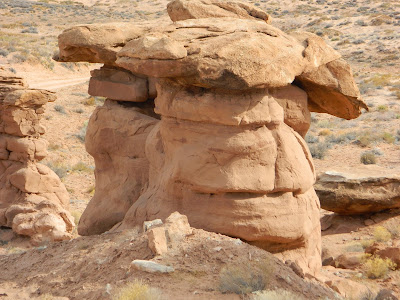 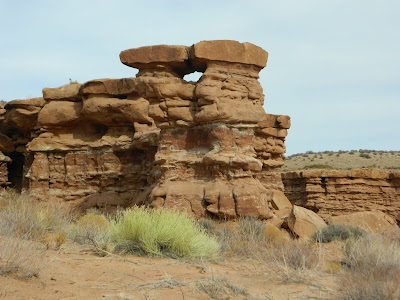 The hoodoos are exposed along Recapture Creek a short distance above its mouth at the San Juan River.  I presume (geologic maps are almost non-existent) the exposed rocks are the Morrison Formation of latest Jurassic age, or maybe the underlying Bluff Sandstone, or maybe both??  The Pocket is not well defined and a large area is covered. The area is the type locality of the Recapture Member of the Morrison, a term that is in usage by some geologists and thrown away by others.  So, maybe the Morrison?

So, I guess Hayduke Lives (an Edward Abbey novel published posthumously in 1990 and a sequel to The Monkey Wrench Gang)---the American Southwest is in trouble and the Green Baron is wearing the white hat and trying to sabotage the world’s largest walking dragline!  Yes, I have been told before that I have a weird and wandering mind. 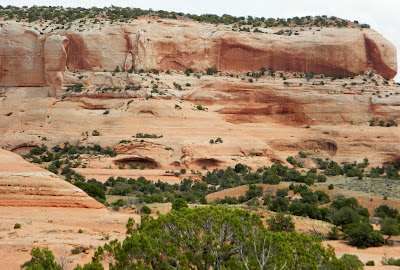 And the wind blows, the dust clouds darken the desert blue, pale sand and red dust drift across the asphalt trails and tumbleweeds fill the arroyos. Good-bye, come again (Edward Abbey).  Next time it is on to Hovenweep National Monument, Blanding, and Edge of Cedar’s State Park.  Stay Tuned.