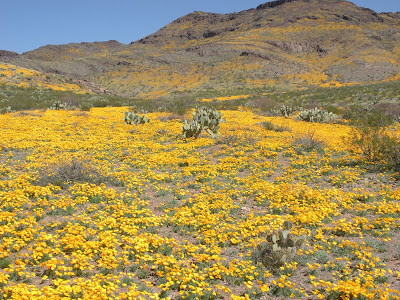 My next journey was to visit the displays of the Miners Coop Rock Show.  I had been hunting several days for the vendors as the show venue moved from the 2015 location.  Of course I never bothered to examine one of the Show booklets to locate a position; however, even the booklet had a wrong listed location!  At any rate I found them on the west side of I-10 near the Ina Exit.  I was particularly interested in this group since at least three vendors were members of the Colorado Springs Mineralogical Society (CSMS).  In addition, a business from Arkansas and another from Gardner, Colorado, were present with their booths.  These latter two are regular vendors at our June CSMS event.  After visiting with the CSMS members, I diligently hunted through other displays and came up with up a couple of nice blue specimens of a calcium copper zinc sulfide known as serpierite [Ca(Cu,Zn)4(SO4)2(OH)6-3H2)].

Serpierite is another one of those nice blue copper minerals ranging from a light to a dark sky blue with some almost a blue-green turquoise color. It occurs in fluffy tufts, crusts, or aggregates of very tiny, lath-like vitreous crystals.  These small crystals are transparent and some almost lack color.  They are somewhat confusing, at least to a soft rocker like me, in that the crystals are elongated along axis a and not the “usual” c axis.  In fact, they are flattened along the c axis to produce the lath-like shape.  Serpierite fractures easily into splinters and seems quite soft (~2 Mohs).  I tried an unglazed porcelain plate and the mineral essentially leaves a white streak.

Serpierite is a member of the small Devilline Group. I have a small specimen of devilline [CaCu4(SO4)(OH)6-3H2O] where the small tuft of platy crystals are essentially impossible for me to distinguish from serpierite.  As one can observe devilline is missing the zinc of serpierite.  Add some cadmium in place of some of the calcium in serpierite and the mineral becomes aldridgeite (structure the same: isostructural).

Serpierite is a secondary mineral and found in the hydrothermal zone associated with copper and zinc deposits.  For example, at the type locality of serpierite in the Lavrion District of Greece, there are numerous primary copper minerals and primary zinc minerals such as sphalerite.
I have three specimens of serpierite from different localities and all are somewhat different: Lavrion District, Greece; Creole Mine, Beaver County, Utah; Bay Horse District, Challis, Custer County, Idaho.
The Lavrion District of southeastern Greece is probably the country’s most famous and oldest mining area.  There are signs copper was mined in the years 3000 B.C—2000 B.C. corresponding to the Early and Middle Bronze Age.  Of interest is that copper, along with tin, is the major component of bronze.  In 483 B.C. large deposits of silver were discovered and these mines had a direct and major effect on the creation of the Athenian Empire---Classical Athens.  The mines were abandoned in the 6th Century A.D and reopened in the 1880s producing lead, silver, cadmium, manganese and helped finance the building of the modern country of Greece.  The ore deposits became exhausted in the 1980s. (above information from www.ancient-greece.org).
My second specimen of serpierite was taken from the Creole Mine in Beaver, County, Utah, one of the more mineral-rich counties in western Utah.  Information about the mine is tough to locate; however, it was mined for scheelite crystals prior to 1943. Hobbs (1944) reported that several hundred tons of ore containing 0.75% WO3 were mined out by 1943.  Prior to that mining activity lead and silver ores (probably silver- rich galena) were taken from “massive sulfide replacements in limestones along the contact of a quartz monzonite or granite dike.”  The scheelite was located in the overlying oxidized zone in masses of “limonite.”
Back in the 1980s I had an opportunity to help write an Environmental Impact Statement for a proposed fluorspar (fluorite) mine near the old ghost town of Bay Horse in the mining region of the same name.  Specifically, I was looking at the paleontological resources, if any, in the area of the proposed mine.  I do not remember all of the details except that we camped south of Challis along the beautiful Salmon River, the local population was not overly friendly to strangers, and the massive deposits of the Tertiary (Eocene, ~50-55 Ma) Challis volcanics held a gazillion pieces of petrified wood.

The rocks examined at the proposed mine were part of a thick section of something like 35,000 feet of Paleozoic marine rocks that have an extremely complex stratigraphic and structural history (Hobbs and others, 1991).  About the only fossils I remember finding (but again my memory sometimes fades) were numerous graptolites in the black shales.  It was sort of eerie driving through a deserted “ghost town” in remarkably good shape. The area was privately owned and we did not stop to explore.
The Bay Horse mining area deposits were first noted in 1864 by a prospector traveling along the river but the first lode claim was not located until 1873.  In 1877, a major lead-silver vein was discovered and by 1878 a gold/silver rush to the area had begun. The metals were found in replacement ore bodies (probably associated with Cretaceous and Tertiary intrusives).  In 1880, a 30-ton smelter was constructed, and within two years charcoal kilns were constructed to provide the smelter with a local fuel source. By this time, the town of Bay Horse had a population of about 300 and a complex of substantial, permanent buildings.  Only nine years later in 1889 the smelter closed.  Evidently smaller scale production continued until 1925 as the ore was transported south to a smelter in Clayton.  The Bay Horse District was a quite productive area as total mineral production is estimated at ~200 oz. of gold, 6.3 million oz. of silver, 6.6 million lbs. of lead, and 39 thousand lbs. of zinc. (above from www.deq.idaho.gov)
Since I visited the area the State of Idaho made a great decision and purchased the Bay Horse area and renamed it the Land of Yankee Fork State Park.  I look forward to returning. And, I never paid much attention to note if the fluorspar mine was ever completed.
My third specimen of serpierite has an older looking label stating it was collected in the Bay Horse area at Challis, Idaho.  However, the descriptions of serpierite at www.mindat.org do not recognize the mineral at Bay Horse.  But I did find a reference in the Handbook of Mineralogy, www.handbookofmineralogy.com  noting the occurrence of serpierite from the Bay Horse Mine at Challis.  Maybe?  Maybe not?