IT IS ALWAYS IN SEASON FOR OLD MEN TO LEARN
Aeschylus

The last five years have provided an amazing learning experience for me since the Civil War Sesquicentennial has provided a wealth of written information for amateurs to digest.  I have thoroughly enjoyed the opportunities provided by some very good authors and writers, and dream that my enjoyment will continue for several years.

Dreams in old guys are part of our personal time machines.  Sometimes the machine takes us back and we experience memories.  At other times we go forward and dream (apologies to Jeremy Irons).  One reoccurring dream in my life, other than forgetting to study for the calculus test, is the first experience in Salt Lake City.  I have written about Utah in numerous Blog postings since the state played such an important part in my early adult life.  I attended the University of Utah (1967-1970), spent the 1971-1973 summers as a seasonal Park Ranger Naturalist  (Dinosaur National Monument), researched my way through two sabbatical leaves (1978 and 1985), completed about 20 consulting projects in the 1980s (Environmental Impact Studies—Paleontology), supervised several MS theses on Utah rocks and fossils, and conducted stratigraphic research for two decades.  So, it seems only normal that I often dream about popping over the Wasatch Mountains, seeing the Salt Lake Valley with the Lake in the distance, and wondering if this was the best idea for a small town kid with a new small town bride.
At any rate, one of the first trips to explore the valley was an outing to the Great Salt Lake on the western edge of the City.  Like most other tourists to the Lake we were curious to see if our bodies could really float in the salty water.  So off we went on an early free weekend.  To put it mildly, the lake was sort of a disappointment.  First of all, the shoreline of the Lake had a terrible smell.  I later found out that cynobacteria and algae live in this hypersaline environment and their decaying products produce hydrogen sulfide.  In addition, brines flies and brine shrimp (including their pupae) die and also decay in this low-oxygen shallow water—and smell.  In addition, potential swimmers must plod through the smelly mud and active brine flies to reach the water.  You can float in the water but immediately after leaving the Lake floaters (you really cannot swim) must find a shower and rid oneself of the salty effluent crusting on your body.

Lake Bonneville was a fresh water lake as evidenced by fossils of fish discovered in the sediments associated with the lake.  And, large mammals inhabited the shoreline environments.  For several years I was fascinated by fossils associated with Lake Bonneville and preserved in shoreline sediments (mostly turning up in sand and gravel quarries).  I suppose these sediments have preserved the greatest concentration of Pleistocene musk oxen of any locality in the world.  These oxen were not specimens of the living species (Ovibos) but an extinct form called Bootherium.
The Great Salt Lake is an endoheric lake since it has inlet streams and rivers but does not have an outlet.  Therefore, the Lake has a very high salinity, perhaps up to ~27%, a figure much large than the oceans ~3.5%.  So, human bodies (and other things) are quite buoyant and float in the water in the Great Salt Lake.  In addition, the inlet streams are depositing several tons of new minerals into the lake each year. 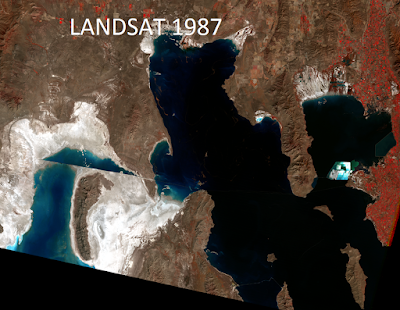 Great Salt Lake sits in a very shallow pan (maybe 30-40 feet at its deepest point compared to Lake Bonneville at near a thousand feet) and varies considerably in surface size due to rain and snow in the nearby mountains (input), and in the amount of evaporation (output).  Most geologists talk about an average size of perhaps 1700 square miles. When I arrived in Salt Lake City (1967) the University geologists were still talking and teaching about 1963 when the Lake recorded its lowest level and occupied ~950 square miles.  During my 1985 sabbatical leave city planners were pressing geologists to examine the stratigraphic record and guesstimate how much larger the expanding Lake would reach.  It seems that the city and county building “experts” were trying to “fool mother nature” and had allowed buildings on flood plains and low lying shore deposits.  In 1988 the Lake reached a recorded high of ~3300 square miles and cost “someone” millions and millions of dollars.  It is tough to fool the lady.

I find it fascinating that DeRose and others (2014) have been able to link elevations during the last 600 years of Great Salt Lake to broader climate change frequencies in the Great Basin: The modern instrumental record of the GSL-level (i.e. elevation) change is strongly modulated by Pacific Ocean coupled ocean/atmospheric oscillations at low frequency, and therefore reflects the decadal-scale wet/dry cycles that characterize the region.

Since Great Salt Lake is situated in an evaporitic basin, minerals associated with the Lake, and those deposited in the shoreline environments (that fluctuate in width with the rise and fall of Lake waters), are evaporitic minerals, especially halite, sodium chloride.  However, gypsum (hydrated calcium sulfate, CaSO4-2H2O) precipitated from Lake Bonneville in the geologic past and numerous gypsum dunes were left behind in the surrounding desert.  In addition, gypsum currently precipitates from waters of the Great Salt Lake mostly as small flakes of selenite (I think) and not in abundance like halite.  However, at times in some locations the selenite precipitates out in the form of elongated blobs termed stalagmites and ever rarer cactus shapes.
I purchased my cactus selenite specimen several years ago during a trip to Utah since something about the mineral just caught my eye.  It was cheap since the seller seemed to be liquidating his/her collection.  Evidently it was collected, according to the label, by Lehigh Minerals out of Bountiful, Utah.  A couple of years ago I looked on their web site (www.lehighminerals.com) and found the following information:  CACTUS SELENITE, NEW FIND, Great Salt Lake, Tooele County, Utah,  14 x 12.5 x 6.5 cm, Large Cabinet,  New Find,  Selenite Crystals with the individual crystals pointed out with pointed terminations forming a rounded mound of crystals.  The Selenite is Fluorescent and Phosflorescent with a creamy white color.  It is the first time specimens like this have been found in the Great Salt Lake.  These are white to cream and not any brown.
That made it kind of exciting—a five buck specimen that represents a new find.  Even more exciting is information from www.findingrocks.com:  Cactus' Selenite - Location: West Side of Great Salt Lake¸ Utah. Large Cabinet. Here we have another new and in my opinion spectacular discovery from Utah's Great Salt Lake. It should be noted that we returned to this locality in October 2008 and to our dismay the area had completely changed and these unusual specimens were all gone!!! In all likelihood our find from 2007 was merely a one time 'fluke' and it would seem that there is little likelihood of ever finding more!! There are not many of these unique specimens still available.

Unlike most large lakes the Great Salt Lake is named for what it truly is -- it is great and salty.  It is also notable for other reasons.  Viewed from space it is an unmistakable landmark in the midst of the Rocky Mountains.  To geographers it is America's Dead Sea.  To geologists it is the shrunken remnant of a great Ice Age predecessor.  To engineers it is an obstacle to travel and a menace to the works of man.  Those who would profit from it regard it as a rich liquid mineral deposit.  To tourists it is a natural wonder like Grand Canyon and Yellowstone Park to be viewed and experienced at least once.
William Lee Stokes, my dissertation adviser at Utah
Posted by Mike at 7:56 PM 1 comment: