It is always nice to run across minerals at a show that you recognize as coming from a mine or area that no longer is available for collecting.  At the 2019 Tucson Show I was rummaging around Shannon and Sons Minerals and was delighted to find a specimen of philipsbornite (an arsenate) that was collected from the Grandview Mine in northern Arizona.  I then remembered that somewhere in my home collection thee was a specimen of aurichalcite from the Grandview that I had picked up at the Colorado Springs show a few years ago.  That little tidbit may seem insignificant to many readers; however, The Grandview Mine (AKA Last Chance Mine, Canyon Copper Mine) is located on Horseshoe Mesa in Grand Canyon National Park.  Most us know that mineral collecting is prohibited in national parks.  So, how did these specimens arrive in my collection?
A USNP sign above the mine states: “In 1890 prospector Pete Berry staked the Last Chance copper claim 3,000 feet below you on Horseshoe Mesa.  The Last Chance Mine began a 17-year flurry of activity here at Grandview Point.

For a while the Last Chance Mine thrived.  The ore was rich; it claimed a World Fair’s prize in Chicago in 1893 for being over 70% pure copper.  But the high cost of packing ore to the rim, then shipping it to be refined, doomed the operation.  Berry and his partners sold the mine in 1901 to Canyon Copper Company.  The new owners continued mining but ceased when copper prices plunged in 1907.
Mining on Horseshoe Mesa, though short-lived, had a lasting impact.  Grandview became Grand Canyon’s most popular tourist area for about 10 years when Grand Canyon tourism was in its infancy. [Along with his mining endeavors, Berry and wife Martha started a tourist business at Grandview Point in the early1890s that remained the South Rim’s most popular destination until 1901. (Anderson, 2000)] The Grandview Trail, built by Last Chance miners to reach their mines now serves thousands of hikers each year.” 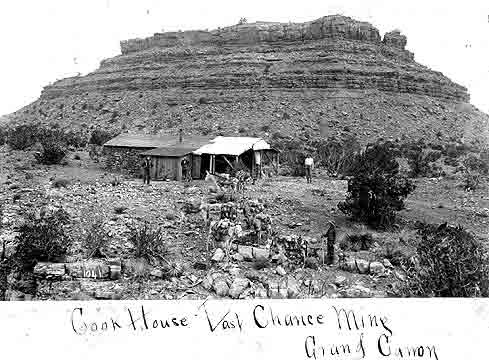 Ascarza (2014) noted that “Ore was transported from the drifts to the top of Horseshoe Mesa using a mule-powered hoist, then taken by pack train on the four-mile long Grandview Trail.

The mules carried 200 pounds of ore per trip, averaging a trip and a half a day. Afterwards, the concentrate was hauled by wagon to Apex Junction and shipped by rail to the El Paso smelter.”

Ross (1972) in nominating the mine area for the National Register of Historic Places stated: “A few years later [after 1907], William Randolph Hearst acquired the property and in 1940, he sold it to the National Park Service.”  I was uncertain about the mine history from 1907 to 1940 until I located some NPS historical documents that noted: “ William Randolph Hearst’s acquisition of Pete Berry’s and the Canyon Copper Company’s patented lands in 1913,totaling207.7acres,posed a much greater threat, as the newspaper magnate clearly had the political clout to disregard informal pressure and the capital to develop anything he wished. Hearst did taunt the NPS with rumors of grand develop-mental schemes but generally cooperated with authorities, agreeing to exchange 48.9acres at Grandview Point for 25.8acres elsewhere in 1926, and occasionally discussed the gift or sale of his lands to the government. Cooperation vanished, however, when Hearst’s attorneys once again broached the subject of a sale and the NPS responded with a Declaration of Taking in September 1939. Park officials sustained criticism from the regional press, chambers of commerce, local residents, and the county board of supervisors for employing condemnation, the only time it has done so in park history, and for offering only $25,000for the prime real estate. Hearst’s appraisers estimated its value at$367,000, and his lawyers fought for the higher figure until October 1941, when federal judge David W. Ling ordered the payment of $85,000. The taking, however, was legally effected in July1940.” (National Park Service, 2019).

I presume then that collecting of minerals from the Grandview Mine became illegal after the incorporation into Grand Canyon National Park (although I noted a specimen shown on MinDat.org was collected in 1966, another in 1997).  However, many years ago I asked geologists in Arizona about Grandview specimens seeing daylight.  A few informed me that collectors and/or tourists had often visited the mine after 1940 and illegal collecting did not finally cease until “bat gates” were installed in 2009.  These gates protect the Townsend's Long-eared bat colony, and various cultural artifacts, while keeping out human trespassers.

As I understand the situation (sometimes that is a stretch) the copper minerals were concentrated in breccia zones situated alongside structural flexing features.  MinDat.org stated, and this is important later on in this story, the “ore body is a pipe-like body [entirely] hosted in the upper Redwall Limestone.”  The Grandview Mine is the most famous mineral locality of these breccia pipes  (Anthony and others, 1995) and is associated with the Breccia Pipe Uranium District described by Wenrich and others (2018) and presented at the Metallic Ore Deposits of the American Southwest Symposium sponsored by the Friends of Mineralogy, Colorado Chapter.  I attended the August symposium but do not remember if she specifically mentioned the Grandview Mine.

Wenrich and others (1992, 2018) noted “the northern Arizona metallic district can be thought of as a paleo-karst terrain, pock-marked with sink holes, where in this case most “holes” represent a collapse feature that has bottomed out over 3000 ft (850 m) below the surface in the underlying Mississippian Redwall Limestone. These breccia pipes are vertical pipes that formed when the Paleozoic layers of sandstone, shale and limestone collapsed downward into underlying caverns.”  The base-metal ores (copper and silver) may be related to, or similar to Mississippi Valley Type deposits where emplacement of ores suggest low temperatures (as opposed to hydrothermal emplacement).
Besides the gold and silver the breccia pipes attracted the attention of the U.S. Atomic Energy Commission as they searched for uranium.  “In 1951, the U. S. Atomic Energy Commission contracted with Dr. Russell Gibson, Harvard University to make a radiometric reconnaissance survey of "red bed" copper deposits in the south-western United States for their uranium content, and possible production capabilities. He examined 36 properties in 4 states -Arizona, New Mexico, Texas, and Oklahoma. Properties examined in Arizona were the Anita Mine, Grandview Mine, White Mesa district, and the Warm Springs district. The old Grandview copper mine in Grand Canyon National Park exhibited the greatest uranium concentration of all the 36 properties examined.” (Arizona Geological Survey, 2019).
Perhaps even more interesting in todays geopolitical world is that Rare Earth Elements (REEs), and especially Heavy Rare Earth Elements (HREEs), are significantly enriched in the uraninite (UO2) found in many breccia pipes.  “Mixing of oxidizing groundwaters from overlying sandstones with reducing brines that had entered the pipes due to dewatering of the Mississippian limestone created the uranium deposits.” (Weinrich and others, 2018).  I wondered if REEs are also present at the Grandview Mine.

According to MinDat.org the Grandview Mine has produced 32 valid minerals and is the type locality of grandviewite, a copper aluminum sulfate (Cu3Al9(SO4)2(OH)29).  Anthony and others (1995) noted that erosion has removed large amounts of overlying rock and has resulted in the oxidation of the primary minerals.  A suite of secondary copper, zinc, iron, uranium, and arsenic minerals such as cyanotrichite, brochantite, chalcoalumite, langite, metazeunerite, scorodite, olivinite, and adamite was then preserved.  MinDat did not list uraninite as occurring in the pipe—with good reason, I guess! Weinrich and others (1992) believed that breccia pipes restricted to the Redwall Limestone have little or no uranium and REE potential since those pipes that do contain elevated gamma radiation (as at Grandview), the anomalies are entirely restricted to downdropped sandstone blocks from the Surprise Canyon Formation or the lower part of the Supai Group.
MinDat.org did note the presence of the radioactive copper uranium arsenates zeunerite and metazeunerite at Grandview.
One of the specimens in my collection from the Grandview Mine is aurichalcite, a secondary zinc copper carbonate [(Zn,Cu)5(CO3)2(OH)6].  The crystals are pale green-blue, prismatic and lath-like that often radiate from a single point and cover the matrix (??gypsum).  They are “typical looking” aurichalcite crystals.

The really interesting specimen I acquired from Grandview is the rare lead aluminum arsenate, philipsbornite [PbAl2(AsO4)AsO3OH)(OH)6].  Philipsbornite is usually associated with lead deposits as a secondary mineral such as at the Red Lead Mine in Tasmania, Australia (home of the famous crocosite). Although several articles refer to the Grandview Mine as the single locality in the U.S. for philipsbornite, recent notes have indicated a second locality in Montana (see MinDat.org).

Philipsbornite from Grandview is usually an earthy mass of tiny, yellow to yellow-orange, indistinguishable crystals.  If not in an earthy mass, it can be somewhat hard at ~4.5 (Mohs) and have a vitreous luster.  It just looks sort of dull except that it is studded with blue crystals that have been identified as osarizawaite and green aggregates that may be brochantite.  Now, osarizawaite (an iron aluminum copper sulfate; [Pb(Al2Cu)(SO4)2(OH)6]) is usually listed as having green or teal blue or green-yellow color.  However, a Michael Kline photo on the MinDat.org Grandview Mine gallery describes his specimen as “Yellowish clusters of minute Philipsbornite with blue Osarizawaite and green Brochantite.” Description of a similar specimen shown on findingrocks.com states, “ the Osarizawaite is the finest I've seen for the species, featuring crystals of unusual size, form, clarity, and color-- deep blue! The green crystals have not been analyzed but appear visually similar to the omnipresent Brochantite on Grandview specimens.  So, I am sticking with the tiny blue to blue-green crystals as the uncommon osarizawaite.  Whatever, the specimen has some unusual copper minerals and I feel “lucky” for being able nab them at a show. 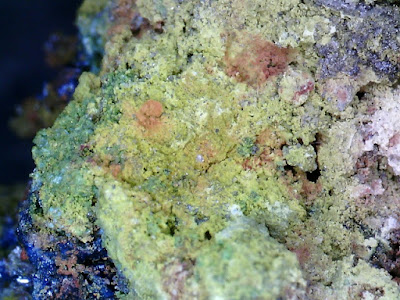 There are specimens from the Grandview Mine out there in the mineral world, but they do not often appear on the market.  With the bat gates now locked, and collecting prohibited, any specimen is probably from some collector breaking up their collection.  However, I noted that in 2010 more than 1,200 mineral specimens from the Grandview Mine were added to the Grand Canyon National Park’s Museum Collection (Grand Canyon National Park, 2012).  You may download Quest For The Pillar of Gold (22.5 MB PDF file) a Grand Canyon Association monograph about mining and miners of Grand Canyon.