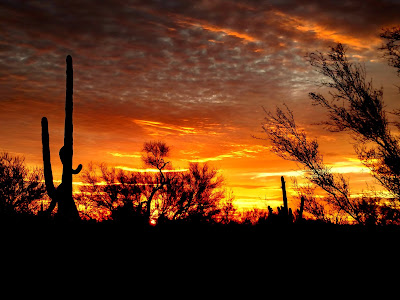 The weather in Tucson has been just pretty fantastic!  There was some rain during the two-week window for Shows; however, visitors could not offer many complaints.  The last weekend of the Shows the temps jumped to mid-70s and remained for the following week.


One of the really big venues in the City is the Kino Gem and Mineral Show, formally the Kino-Electric Park Show.  By my rough count there are ~240 vendors ranging from Idaho Bling Bling to Australian Mineral Mines.  A rockhound could easily spend a day wandering through indoor and outdoor displays.

There were not a large number of mineral dealers offering collectable  crystals but there were numerous stalls selling amethyst cathedrals, and massive quartz cut and polished into perfect terminated “crystals.”  Both were being marketed as coffee table décor. 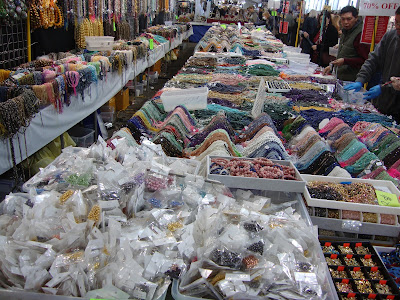 However, since every wild pig can find an acorn or two, I was able to muster up a couple of mineral specimens for my collection: vlasovite and fluorbuergerite.  Now why in the world would I chose those two minerals?  Mostly because I have posted on my desk a quote by the journalist Bill Moyers: When I learn something new, and it happens every day, I feel a little more at home in the universe, a little more comfortable in the nest!  My goal at this stage in my journey through the cosmos is to learn about a new mineral every week, not just its name but something more in depth (remember I am a softrocker/paleontologist and far from a mineralogist).  When I first noticed these two minerals, I did not have the slightest idea about their chemical composition, environment, or “anything” about them.  So, I decided that two orphan minerals relegated to the dusty back drawers would become my “learning project” for the week!


It turns out that vlasovite, a sodium zirconium silicate [Na2ZrSi4O11],  has a pretty steep learning curve, especially when I try and understand the crystallography. For example, the silicate ion consists of a tetrahedron arrangement of four oxygen atoms surrounding a central zirconium atom.  So far, so good!  In vlasovite there are four of these tetrahedra joined together in a chain arrangement that then are bonded to zirconium octahedra (eight oxygen atoms surrounding a zirconium atom). I have drawn that arrangement out and “sort of” understand it.  What I fail to understand is how the sodium atoms fill channels in the arrangement.  Oh well, life is full of mysteries and I will continue to ponder that question—although maybe not in depth 😊


Another factoid where I need a mineralogist to answer, is “why.”  Vlasovite is a stable Triclinic mineral (three axes, A, B, and C all of unequal length and none are at right angles to each other)) below 84 degrees F.  Above this temperature vlasovite is a monoclinic crystal (three axes all of unequal length, two at right angles to each other while one in not at right angle).   Now, how does that happen? Is the Crystal System determined at “birth” or is there a change later in life?  Are the Crystal Systems reversible?  Don’t know.


Vlasovite occurs in rocks I will probably never see.  It was first described from the Kola Peninsula in Russia (1961) where it formed as a replacement for eudialyte during an invasion(s) by hydrothermal fluids.  In 1967 it was identified as an accessory mineral in miarolitic granite cavities on Acension Island in the Pacific. Finally, in 1973 vlasovite was identified as a primary mineral in metamorphic rocks of the Kipawa Alkaline Complex in Quebec, Canada (summary from Gittins and others).  Today the Complex is the major source of vlasovite material on the market. 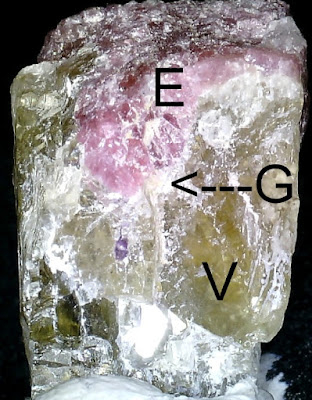 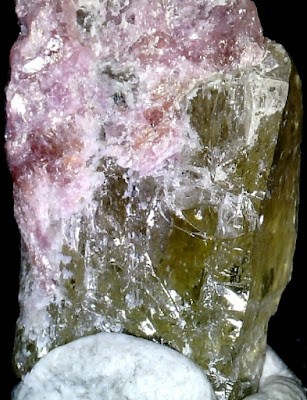 Vlasovite is a tough mineral to identify unless it is associated with pink eudialyte (which it often is).  The color ranges from colorless to pink to light brown; often the latter color is due to microscopic inclusions. It is brittle with a conchoidal fracture and a hardness of ~6.0 (Mohs). It leaves a white streak and ranges from translucent (my specimen) to transparent with a pearly luster.  Crystals of vlasovite are quite rare and most specimens consist of irregular grains.


So, what about the fluorbuergerite? It turns out this mineral with a long name is an iron rich tourmaline. The original name was buergerite until the discovery of fluorine in the chemical makeup.  Superficially, fluorbuergerite looks much like the common iron rich tourmaline known as schorl; however, it is much rarer than schorl and MinDat lists only five worldwide localities.


Rockhounds often speak of tourmaline as a single mineral; however, mineralogists realize that tourmaline is actually a large group, ~40, of closely related minerals.  Most of us are familiar with such species as dravite (magnesium rich), elbaite (lithium and aluminum rich), and schorl (iron rich). Several varieties of Tourmaline Group minerals also  are recognized, mainly by gemologists—for example, cat’s eye {chatoyance), rubellite (pink to reddish), watermelon (color zoning of pink core and green rim), etc.  However, all members of the Tourmaline Group have a common chemical composition (MinDat):

So, A, D, and G are positively charged cations  while the silicate, borate, fluorine, oxygen, and hydroxyl are negatively charged anions.


The borosilicate and fluorine-rich fluorbuergerite has a chemical  formula of: Na(Fe3+3)Al6(Si6O18)(BO3)O3F and is a bronze-brown to dark-brown color (although almost appearing black), often with a brown schiller, and imparts a brown streak on unglazed porcelain.  It is generally opaque but may appear translucent in thin slices and a strong light. Like other tourmalines it is hard and rates a 7.0 (Mohs). Crystals are long to short prismatic and often terminated.  The best distinguishing feature—bronze to brown tourmaline crystals collected from rhyolite cavities found at Mexquitic, San Luis Potosi, Mexico.