HUNTING FOR TOPAZ: UTAH AND COLORADO


The mineral topaz is one of the more widespread gem minerals in the western U. S. and is valued by collectors for both display specimens and faceted stones.  At a hardness of 8 (Mohs Scale), topaz, a silicate of aluminum with fluorine and hydroxyl [Al2SiO4(F,OH)2], is the hardest of the silicate minerals and therefore quite durable.  However, it does have perfect basal cleavage and so may fracture or split along that plane.  This brittleness is a common problem if the stone is roughly handled, either during faceting or after completion.  Large faceted stones are perhaps best displayed in pendants rather than in rings since additional protection from “hard knocks” is provided.  Although cut topaz will take a nice polish, it has a weak dispersion factor (.14), especially when compared to diamond (.44).  Most often this comparison is noted in a round brilliant cut as topaz simply lacks the “fire” associated with diamonds and some other gemstones.  To offset these weaknesses, buyers note that the price of cut stones is usually very reasonable and one can afford the purchase of some really large gems, especially those of the colorless/clear variety.
Specimen collectors value topaz since many crystals have interesting terminations, including some with double terminations.  However, these double points are somewhat rare as the crystals commonly break along the basal cleavage. Topaz comes in a variety of natural colors but the buyer should be aware of imitations!  Yellow or golden topaz is one of the more valuable of the topaz gemstones; however, some dishonest dealers pass off faceted citrine as topaz.  There is an entire range of valuable orange to sherry to red to pink topaz crystals with many specimens coming from Brazil.  Intense pinks have often been heat treated to satisfy the purchaser but most people are unaware of the treatment.  Most certainly examine any red topaz setting to see if red foil has been placed under a pale pink stone!  Perhaps blue topaz is the most popular color in the market today and good colored stones command a decent price.  But again be aware---colorless stones may be irradiated with gamma rays to produce the darker blue color.  There is nothing wrong with treated stones as long as the dealer apprises the buyer of the process.  In fact, the deep blue of London Blue Topaz (irradiated) is an absolutely beautiful stone and makes for a dazzling pendant set in sterling silver.
Colorado has produced thousands of topaz specimens from numerous localities with some gem crystals approaching five pounds in weight (Eckel and others, 1997)!  Local rock club members are familiar with the best known source of Colorado topaz---the pegmatites associated with the Pikes Peak Batholith (Precambrian in age, around 1.05 Ga).  Several of the Colorado mineral societies have claims that may produce topaz and certainly some society members have individual claims.  For many years a commercial topaz operation was open to the public near Spruce Grove Campground as the Topaz Mountain Gem Mine.  The intrepid rockhounders could purchase “buckets” of material and hunt for the rough crystals.  Today mines of the Glacier Peak Mining L.L.C. at Topaz Mountain “produce the finest U. S. topaz crystals and cutting rough …and perhaps the finest bi-color sherry and blue topaz ever found” (personal communication, Joseph L. Dorris).  If interested in collecting, I would encourage prospective topaz hunters to contact Pinnacle 5 Minerals L.L.C. at www.pinnacle5mineralscom
One of the more interesting aspects of the Pikes Peak topaz is that many of the crystals are found in stream sediments and weathered granite. Prospectors screen for the crystals rather than “pound rock”.  These alluvial specimens are commonly frosted on the surface but have not been transported a great distance from their granitic source.

Other collecting localities associated with the Pikes Peak Batholith include: Cameron Cone and Bear Creek Canyon in El Paso County; Devil’s Head and Long Hollow (with giant crystals) in Douglas County; Badger Flats area and the Tarryall Mountains in Park County; Wigwam Creek area and the South Platte District in Jefferson County, the latter having produced “sky-blue” crystals weighing over 50 pounds; and Glen Cove on the peak itself in Teller County (Eckel and others, 1997).

However, mineral collectors in Utah (and other states) are well aware of the “other” Topaz Mountain, the famous locality in the West Desert of Utah.  Mineral hunters may owe its discovery to Captain James H. Simpson who served the Army Corps of Topographical Engineers in the southwest part of the U. S. during the 1850’s and was most active in Texas and New Mexico.  However, in 1858 he was assigned to the army of General Albert Sidney Johnson during the “Utah War”.  One of his assigned tasks was to survey a new wagon road from Camp Floyd (the encampment of federal troops southwest of Salt Lake City) to California that was situated south of the more popular Humboldt River Road.  Leaving Camp Floyd in October Simpson only made it as far as the West Desert of Utah but “discovered” the Thomas Range, and most likely Topaz Cove.


The West Desert of Utah is an interesting place (and one of my favorite localities to explore) that displays a tremendous variety of topographic and geologic features.  The area is part of the Great Basin (geographic term) or Basin and Range (geologic term).  This physiographic province stretches from the Wasatch Fault at Salt Lake City (western boundary of the Wasatch Mountains) westward to Reno (eastern boundary of the Sierra Nevada Mountains) and from Idaho-Washington south into Mexico.  The Great Basin refers to the fact that very few streams breech the area and most drainage is internal.  The Basin and Range designation indicates that large normal faults have created uplifted block mountains (horsts) and down-dropped valleys (grabens).  Popular thought is that the ranges are generally composed of fossiliferous Paleozoic sedimentary rocks---for example, the House Range with its famous trilobite collecting localities.  However, the Great Basin also has experienced extensive volcanic eruptions and some ranges are composed entirely of Cenozoic volcanic rocks.  That is the case of the Thomas Range, the location of Topaz Mountain.

The volcanic history of the Thomas Range is quite complex but includes: 1) eruption of flows and breccias from a caldera with subsequent collapse ~40 Ma; 2) eruption of ash flows with filling of the caldera ~32-38 Ma; 3) flows and ashes ~21 Ma; 4) faulting and tilting of the range ~7-21 Ma; and finally 5) the eruption of the topaz-bearing rhyolite ~6-8 Ma (Lindsey, 1998).  Gases percolating through the cooling lava produced cavities called lithophysae and it was within these fissures that topaz and other minerals were deposited.  I believe the composition of these topaz rhyolites (extrusive so fast cooling) are about the same composition as topaz-bearing granitic pegmatites (intrusive so slow cooling.

Today Topaz Mountain is a named feature at the southern end of the Thomas Range that has been set aside by the BLM as a public collecting locality and is commonly known as the “Topaz Cove”.  There are two ways to collect crystals: 1) take a heavy crack hammer and “pound” on the rhyolite, especially in the “honeycombed” areas--the lithophysae; or 2) walk the gullies and slopes looking for crystals weathered loose from the host rock.  The former approach produces the sherry- to amber-colored crystals so prized by collectors.  Most have a single termination and are less than one-half inch in length.  With exposure to sunlight the crystals will lose their coloration within a few weeks!  The latter collecting approach, certainly the least strenuous, will produce numerous clear (non-colored) crystals of various sizes with at least some approaching an inch in length.  Small termination points are common.  Topaz belongs to the orthorhombic mineral system but the termination points take on a variety of forms. 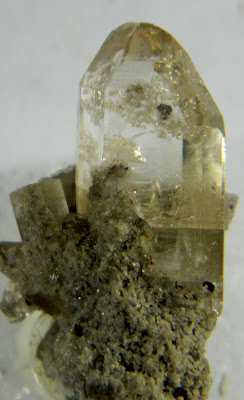 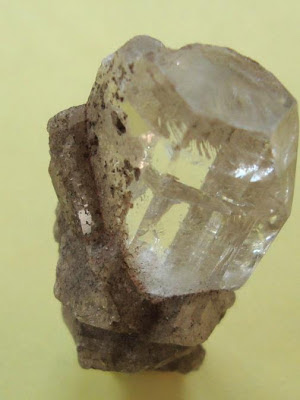 So, if you are interested in collecting examples of Utah’s state gemstone at the “other” Topaz Mountain, travel to Delta, Utah, via I-70, U. S. 50, I-15, north on U. S. 6 for about 6 miles, then west on the “Brush-Wellman” road for 38 miles.  Follow the signs trending north and west on a gravel road for a few miles and you will arrive at the collecting site—over 600 miles from Colorado Springs. Take along the usual collecting accoutrements including a crack hammer, eye protection, a screen, and “lots” of water.  This is not really a trip for summer months (heat and sun) and the area is isolated (cell phones may not function).  So, plan accordingly.

A final note:   Rocks of the Thomas Range contain a number of other interesting minerals.  See Blog posting of 4/3/2011 describing bixybite.

REFERENCES CITED
Eckel, E. B. and others, 1997.  Minerals of Colorado:  Denver Museum of Nature and Science and Fulcrum Publishing.