In the last Blog posting I described a couple of arsenates that came from the famous Ojuela Mine near Mapimi in Mexico.  But, in doing so, I came across a couple of interesting carbonates in my collection from the mine: 1) rosasite, a copper zinc carbonate hydroxide [(Cu,Zn)2(CO3)(OH)]; and 2) aurichalcite, a zinc copper carbonate hydroxide [(Cu,Zn)5(CO3)2(OH)6].  Aurichalcite has a Zn:Cu ration of about 5:2 while rosasite has a Cu:Zn ration of about 3:2.  Both of these minerals are found in the oxidized zones of copper and zinc ore deposits; the primary minerals (supplying the zinc and copper) were probably sulfates, such as chalcopyrite and sphalerite, that ultimately broke down and moved around, usually toward the surface, in hydrothermal solutions. As the percolating hot solutions reached overlying beds of carbonates the acidic solutions ran into volcanic rocks that blocked their upward movement and forced a horizontal movement along faults and joints.  The solutions also dissolved part of the carbonates and created additional spaces for minerals to form—all sorts of copper and zinc rich minerals were competing for space.

Rosasite (copper rich) is a nice “blue” (sky blue to blue green) color that has been described as a “soft blue.” It is more translucent than transparent and has a hardness of around 4.0+ (Mohs).  The luster can be vitreous but in encrusting, fibrous or botryoidal forms it is more like velvet or silk.  Rosasite does have a light blue streak. At Mapimi many rosasite specimens are botryoidal in nature, associated with calcite, and form on a “limonite” matrix. 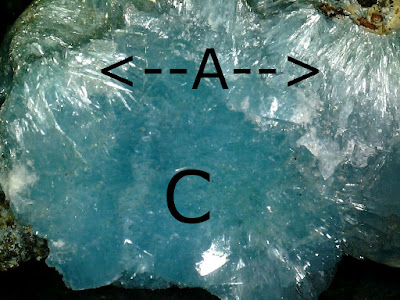 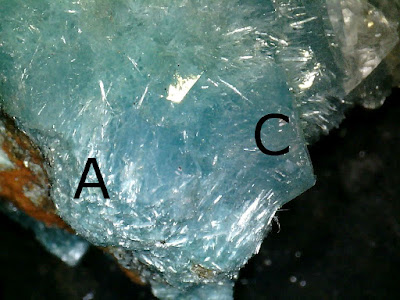 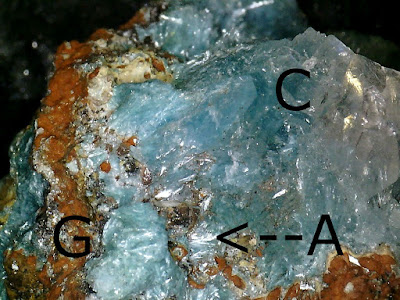 Aurichalcite, the zinc rich “cousin” of rosasite, also has the light blue to blue green soft color but is more transparent than translucent (as opposed to rosasite).  The mineral usually appears as a delicate, velvety coating of soft acicular crystals with a silky luster (as opposed to vitreous).  In fact, these two characteristics appear, at least to me, as the best distinguishing features—the soft (1.0-2.0 Mohs) needle-like crystals, often tufted in sprays, are easily moved around and crushed by a sharp probe.

Both rosasite and aurichalcite are common minerals and found in many localities; however, they never seem to occur in large amounts. Jones (2011) noted that “the zinc that is released by weathering is grabbed up to form several secondary zinc minerals: adamite, smithsonite, hydrozincite, hemimorphite, and descloisite, to name a few.”  Therefore, competition for the zinc is the name of the game.

I have always been fascinated by the creation of secondary oxidized minerals whose precursors were completely different minerals.  Just amazing.  Sort of like the fact that old geologists never die, they just recrystallize.