WYOMING YOUNGITE AND OTHER ODDITIES


I have often been intrigued by minerals from Wyoming; however, it seems as though I was always busy collecting fossils for research and did not have time to chase after minerals.  So, my modest collection seems rather void of many good specimens. 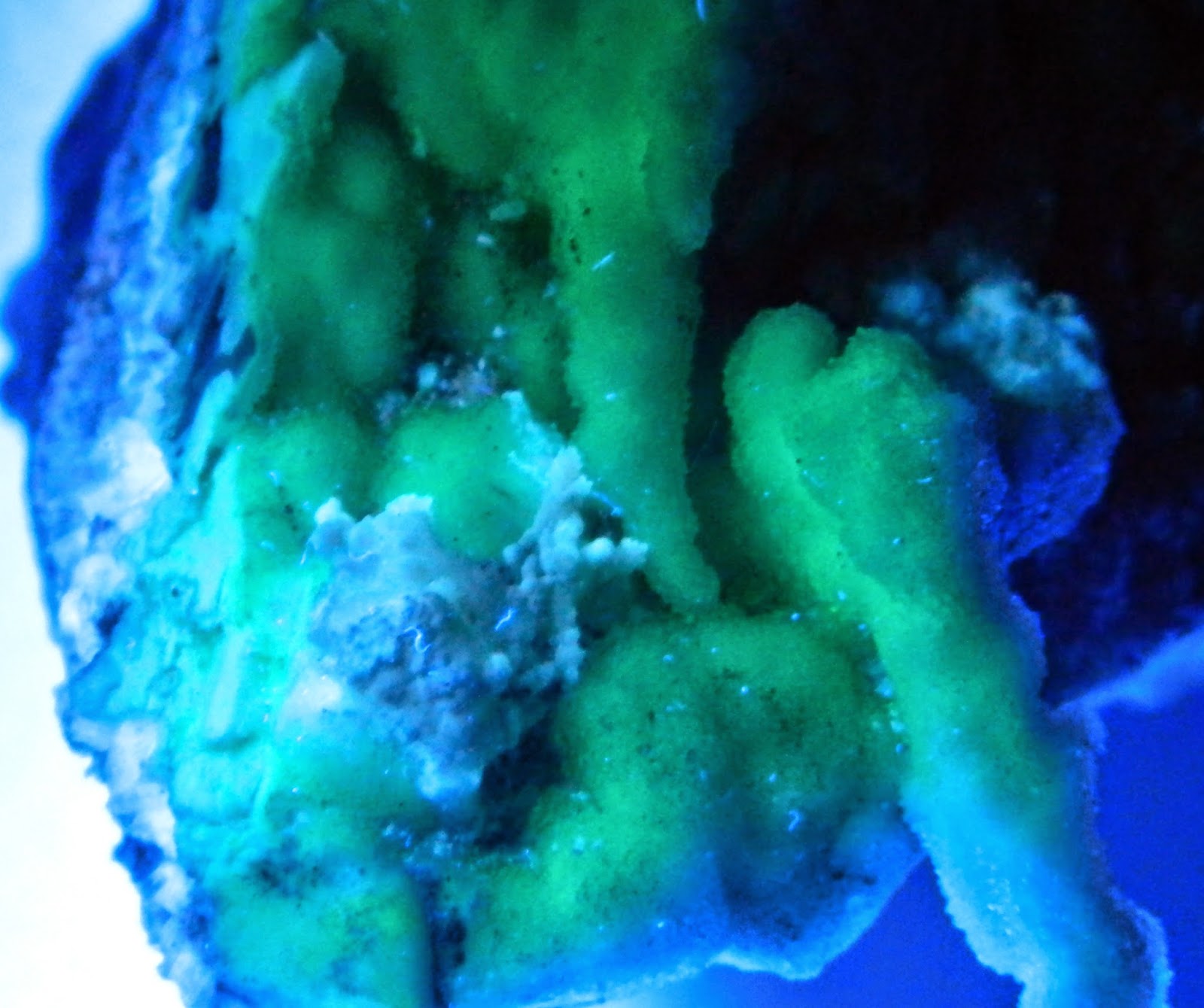 I also have a specimen labeled “Youngite Wyoming” that is “something else!”  It is a specimen that is stalactitic in nature and at first I thought it was youngite since is fluoresces that seemingly diagnostic bright green color.  However, the druze is actually tiny calcite crystals sitting on a “massive” white limestone overlying a crystalline gray limestone.  It evidently was pulled from a creek or lake since the crevices are filled with unconsolidated sand grains.
A second specimen labeled “near Glendo” represents some fairly large stalactites—coarsely crystalline calcite covered by snow white druzy quartz.  The druze fluoresces a pale green but not nearly as bright as some youngite specimens.  I presume the specimen originated in some sort of a void or “cave” in a Paleozoic limestone.
In Tucson this year I acquired a specimen labeled “Seam Quartz, Sweetwater County, Wyoming.”  It is druzy quartz surrounding and filling voids in a reddish-brown fortification agate.  However, the agate banding extends into the white quartz.  I am unable to find additional information about the specimen.


Wyoming is one of those states with a large number of locations that produce chalcedony specimens.  Virtually any outcrop of Cenozoic rocks seems to have pebbles of microcrystalline quartz in the form of petrified wood, “plain ole” chalcedony, and then a variety of “agates.”  However, I use the term agate rather loosely since my preference is to have an agate banded or included.  In today’s world agate often refers to pebbles of chalcedony, and perhaps even quartz.  One of the better known of the Wyoming agates are the Sweetwater Agates.  These chalcedony nuggets are usually included (manganese) and occur as small pebbles in lag gravel and seem derived from the Miocene Split Rock Formation or perhaps the Oligocene White River Formation.  They are found at many localities across the center of the state but are seemingly concentrated north of Jeffrey City.  Perhaps these rather plain looking agates are best known for “glowing” bright green under a UV light.
Posted by Mike at 8:13 PM