When a person of my age thinks about the element Boron his mind goes to Ronald Reagan (the actors last TV gig) and the TV series (in black and white) Death Valley Days.  This western staple was sponsored by Pacific Coast Borax Company/U.S. Borax Company and ran on radio from 1930 until 1945 and TV from 1952 until 1970 with syndicated shows until1975.  The show often featured a wagon in “Death Valley” using a 20-mule team (actually 18 mules led by two horses) pulling a load of “borax” to make a laundry additive (20 Mule Team Borax), Borateem (a laundry detergent), and Boraxo (a hand soap).  My parents always had a can of “borax” on the lavatory to “deep clean” our hands (it could rub them raw).
In the 1950s after my father purchased a green-screen Hoffman TV (at first, we received but a single channel) we huddled around the big cabinet and always tuned in to hear The Old Ranger introduce the show (Reagan came later).  This was an extremely popular show (450+ episodes) and kids of my age always huddled together the following days to discuss the previous episode.  Not having 20 mules to work with, nor even one Shetland pony, we even tried a dog or two to pull our wagons.  Not much of a success here.

The miners at Death Valley were always hauling out borax (an actual mineral: Na2(B4O5)(OH)4-8H2O); in reality there were a number of other evaporite minerals containing boron + oxygen (boron oxyanions) that were hauled by the mules. Boron is an extremely important mineral (besides laundry additives) in our industrial world.  Besides the “natural” minerals, such as borax or kernite, there are a host of synthesized compounds that are of critical importance in a variety of uses, such as in semiconductors.

Elemental boron just does not appear naturally on earth (evidently in some meteorites though).  It usually appears in some sort of a compound with oxygen (B + O) and often as BO3 with an oxidation state of 3-.  The common borate minerals, for example kernite, colemanite, and borax are evaporites and are not very colorful.  Other borates are more collectable such as londonite and rhodizite (see Posting April 29, 2018).

The borate anion is very similar to the silicate anion and in some minerals the two share electrons.  For example, the tourmaline group minerals are complex borosilicates and they certainly have color, and form in non-evaporate environments.

One of the more colorful boron minerals is dumortierite, a rather uncommon aluminum borosilicate, (Al.Fe)7BO3(SiO4)3O3.  Although it may form nice slender crystals, most of the time the mineral is composed of fibrous aggregates that generally are blue to violet in color (although green, pink, brown and green colors sometimes appear).  Dumortierite is about as hard as quartz (7 Mohs), has a vitreous luster, and occurs both in metamorphic and igneous rocks (aluminum and boron rich).  Dumortierite fibers often occur with quartz is a mass that is very hard and quite nice for cabochons. In a Posting on April 17, 2013 I described a specimen that is mixture of dumortierite, quartz, a soft clay-like mineral (probably pyrophyllite), and some other unidentified minerals. This specimen was actually a lapidary slab whose relatives had already been fashioned and mounted into really nice cabs.

However, there is another occurrence of dumortierite that crystal collectors appreciate more than the fibrous variety and that is blue quartz.  Blue is an interesting color for quartz since all blue quartz is due to inclusions, unlike the purple amethyst or golden citrine where trace elements replace some of the silica in the lattice work and produce the colors.  Inclusions producing blue quartz include varieties of riebeckite, a sodium-rich amphibole and especially the variety called blue asbestos or crocidolite; tourmaline; and dumortierite.  With the coloring inclusions, some are microscopic and are in a fine suspension that scatters the light (Willis–Tyndall scattering) while others have larger inclusions scattered throughout the quartz and impart their color. 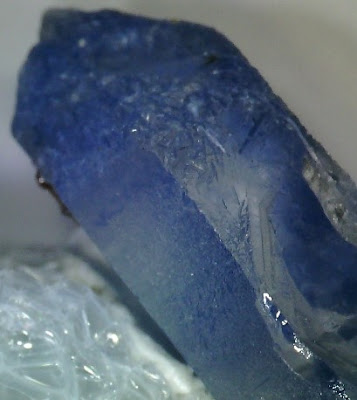 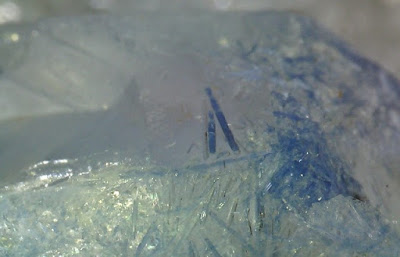 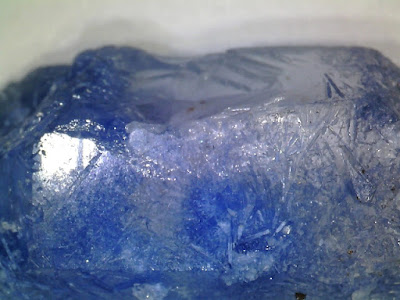 The following information on inclusions is abstracted from a fantastic web site, The Quartz Page ( http://www.quartzpage.de/inc_text.html).

There are basically three ways inclusions can form in quartz:
The minerals form before the quartz. The growing quartz crystals engulfs them and the original form of the included minerals is preserved. These inclusions are called protogenetic. Included fibers than run through the entire crystal at random orientations are typical examples.

Minerals can be included by exsolution. When the conditions during crystal growth allowed the incorporation of elements into the crystal lattice that are incompatible with the crystal structure at different temperatures or pressures, these elements may separate from the lattice to form new minerals once the conditions change. Such inclusions are called epigenetic.

As best that I can determine the quartz specimen I collected in Tucson has protogenetic inclusions of dumortierite.  There seems to be a random orientation of slender, bladed, prismatic crystals in the euhedral quartz crystals.  Almost all specimens that resemble my specimen were collected from the Vaca Morta quarry, Serra da Vereda, Boquira, Bahia, Brazil in 2014 or later. The rocks at the mine are quartzites  and around 1.7-2.2 Ga (Precambrian) in age.  If you spot a reasonably priced specimen you might want to nab it--some specimens on the market today are priced in five figures.