Learn from yesterday, live for today, hope for tomorrow. The important thing is not to stop questioning.  Albert Einstein

Here it is again--another day of self quarantine at the local ranch.  I should not complain since my family and friends are well and safe, but....... My adopted state of Wisconsin is going crazy with Covid-19 and friends tell me the hospitals are full and ICUs overflowing.  The Governor and Legislature continue to fight.  The Black Hills state of South Dakota has the highest rate of Covid-19 per capita in the U.S.  I remain concerned about friends in each state.  Here in Colorado the number of infected persons is increasing; however, nothing on the order of Wisconsin.  As desert, I am very tired of politics and can't wait until the election is over.  But, by January 1st campaigning will begin for the mid year congressional elections!  Yep, you guessed it--I am an old curmudgeon.

We have always held to the hope, the belief, the conviction that there is a better life, a better world, beyond the horizon. Franklin D. Roosevelt

In my last Posting I noted that desautelsite was collected from the Artinite Pit in San Benito, County, California, where artinite is a major mineral found in the excavation.  The locality is part of the New Idria Mining District located in the Diablo Range (part of the California Coast Ranges). The District contains mercury-, chromium- and magnesium-rich rocks associated with a large intrusive body of serpentine.  The mercury mines (mostly cinnabar ore) reached their heyday during the massive gold mining in California, AKA California Gold Rush, as mercury was used to extract the gold from the ore.  Mercury is mixed with crushed gold bearing rocks, or placer sands, and the gold will dissolve into an amalgam.  The mixture is then heated driving off the mercury vapors leaving behind fairly pure gold.  Of course, the mercury vapors got into the air, soil, water, and living organisms creating numerous environmental problems.  The use of mercury did not stop until the 1960s but fish in some streams, such as the Sacramento River, still carry elevated levels of mercury.

Today the Mining District is best known for the gemstones (benitoite is the State Gem) produced at localities like the Dallas Gem Mine and the Benitoite Mine. Numerous other mines and claims are operated as specimen mines yielding a variety of minerals from garnets to serpentine (the State Rock) to gold to artinite to neptunite and others.  The District is the Type Locality to at least 15 minerals.

In my small collection I have four specimens of artinite {Mg2(CO3)(OH)2-3H2O)] purchased at various times over the years.  All were collected at the Artinite Pit.  This excavation is associated with the New Idria serpentine body where the secondary minerals, such as artinite, are located in fractures and cracks as the result of low temperature metamorphism of serpentinized ultrabasic rocks from the Earth’s mantle. 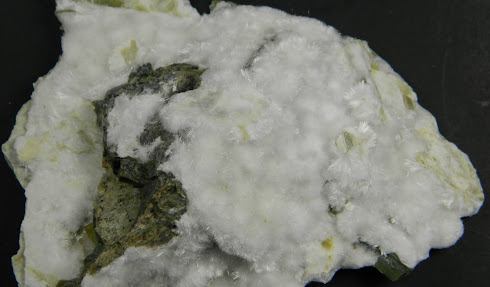 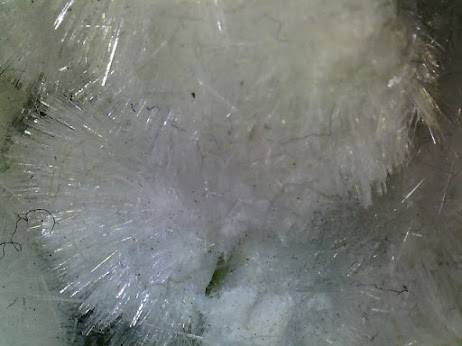 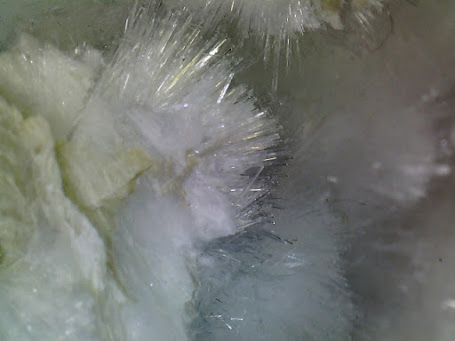 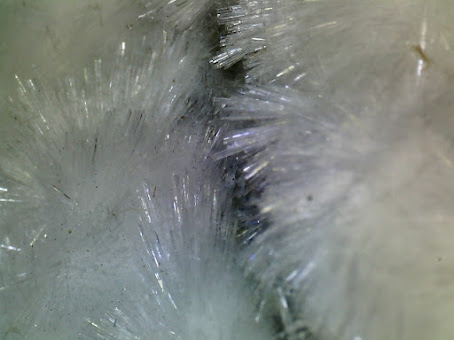 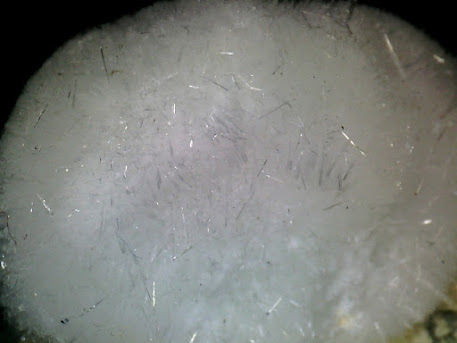 This large botryoid of acicular is attached to the same specimen as desautelsite described in the previous post.  Width FOV ~7 mm. 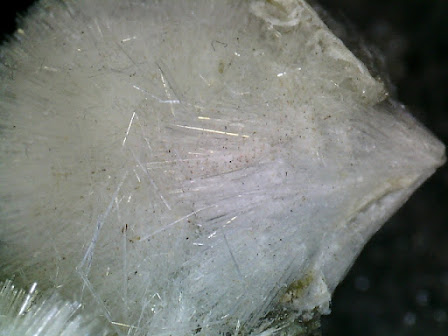 Although artinite is a colorless or white mineral it is actually quite spectacular when viewed under magnification as the individual crystals are acicular and usually form spherical aggregates of radiating individuals.  Others may form botryoidal clusters of silky fibers. The crystals are quite soft at ~2.0-2.5 (Mohs), have a silky to sub vitreous luster, and are transparent.  The crystals are quite brittle, and specimens must be handled with care.  Their morphology, and association with serpentine allows for identification. 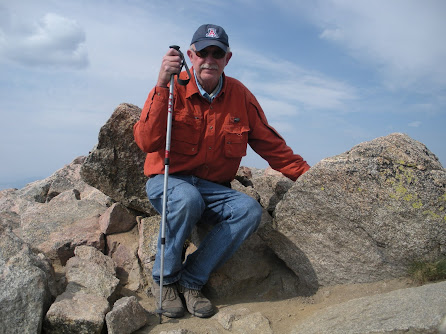 Mt. Bierstadt 14,065 feet. Hope is the pillar that holds up the world.  Hope is the dream of a waking man.   Pliny the Elder