A few year ago, I refer to that period of time as, before the knees collapsed, I had the opportunities to hike a few of the Colorado 14ers.  As with many beginners, Mt. Sherman (14,043 feet) west of Fairplay was one of the early conquests. The mountain sits on the divide of the Mosquito Range south of 14ers Mts. Lincoln, Democrat, Bross, and Cameron (all conquered) and east of Leadville.  Continuing down the spine to the south of Sherman is Mt. Sheridan (13,748), Peerless Mountain (13,348), and Horseshoe Mountain (13,898) while to the north is Gemini Peak (13,951)—made those also.  In many ways the 13ers are more fun since the paths are usually devoid of people.  This cluster of peaks is also known for their many abandoned mines that generally produced silver from the Mississippian age Leadville Limestone

The common way to access these peaks is a gravel road leading west from near Fairplay to a parking area at the old Leavick Mill and that was my route on the way to Peerless, Horseshoe and Sheridan.  However, during my next adventure I wanted to try something different for Sherman and that was coming in from the west via Leadville and Iowa Gulch. This is a longer and more strenuous trail than the Four Mile hike from the east.  There are several reasons to try the Iowa Gulch trail including enjoying the initial part of the hike that traverses a bushy, boggy area with copious amounts of wildflowers (depending upon the season).  For a geologist the upper part of the trail goes near a number of old mines and one mine that may or may not be somewhat active but is still under claim—the Sherman Mine or the Sherman Tunnel Mine.  The mine may be seen from a distance as it is above timberline (12,200+ feet) at the base of a large cirque (Iowa Amphitheater). According to MinDat.org the mine opened in 1968, closed in 1970, reopened in 1975 and then closed again in 1982 and produced around 10 million oz. of silver, and evidently some copper, gold, lead and zinc freed from chalcopyrite, sphalerite, smithsonite, and galena..  Like almost all mines in the area the minerals were hosted in a fault-controlled karst system developed in the Mississippian Leadville Formation with mineralization occurring in the Permian. 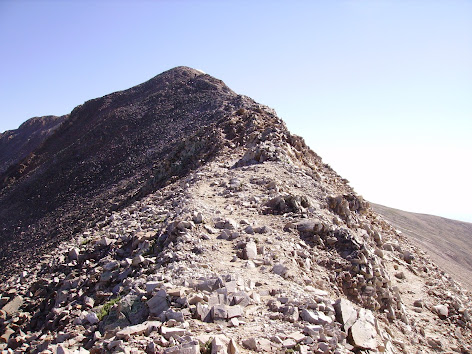 The final trek to the summit of Mt. Sherman.  Just hold on if the wind is blowing. 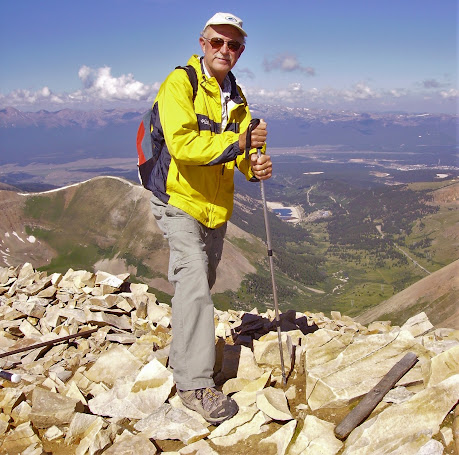 Summit of Mt. Sherman (14,043) looking west towards the Sawatch Range with Iowa Gulch in the foreground. The Mt. Sherman Tunnel Mine is just over the edge and 1800+ feet lower while the town of Leadville is in the distant Arkansas River Valley to the far right.

The Mine is probably best known for producing a rich array of secondary minerals prized by rockhounds including the gangue mineral golden barite, and the carbonates rosasite (copper and zinc), azurite (copper), smithsonite (zinc), aurichalcite (zinc and copper), and cerussite (lead). During my sojourn up to Mt. Sherman I concentrated on the hike rather than hunting for minerals.  However, I did manage to spot some barite in a dump pile along with a very small blue specimen.  The latter was quite fragile and appeared (in the field without a loupe) to be a dark blue azurite.  I left it wrapped and labeled for several years before rediscovering it during my pandemic sorting.  It turns out that the specimen is crystals of azurite that are submillimeter in size with even smaller crystals of cerussite.  Both crystals are absolutely beautiful but unfortunately my camera outfit would not provide a crystal-clear photomicrograph; but it will suffice.  The barite is composed of golden-brown blocky crystals—some nice stuff.  There is also a tiny microcrystal of something that remains unidentified and nice terminated tiny quartz crystals.  Not a bad haul for just rapidly picking up a few stones! 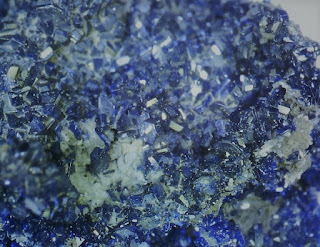 The "blue specimen" from the Sherman Tunnel Mine--full of azurite. Width FOV ~8 mm. 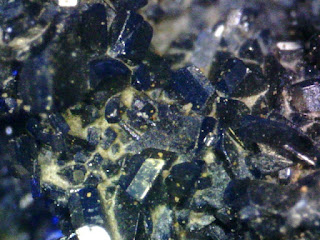 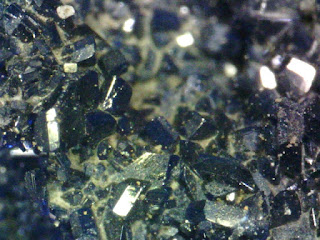 The above two photomicrographs are about as close that I can focus with my camera.  You can spot a few clear elongate crystals that are the lead carbonate cerussite. Width FOV ~3 mm. 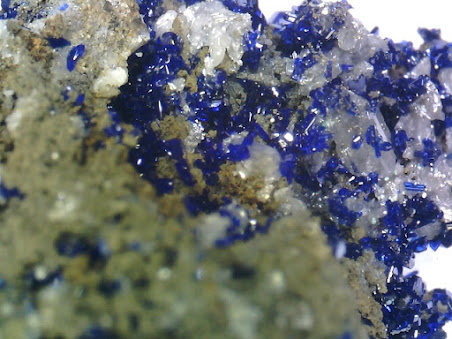 Notice the really nice blue crystals of azurite along with the colorless crystals of cerussite that occupy the right side of the photomicrograph. The width FOV ~ 5 mm so the individual crystals are much less than 1 mm. in size. 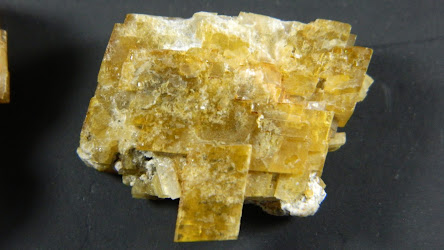 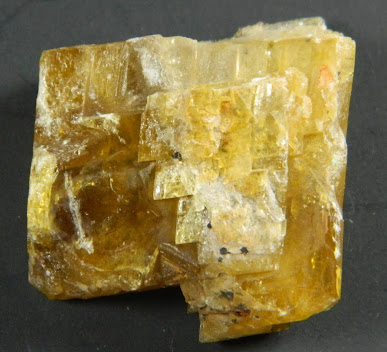 Blocky barite B. Note 3 small dots that are the unknown mineral.  Width of specimen ~2.7 cm. 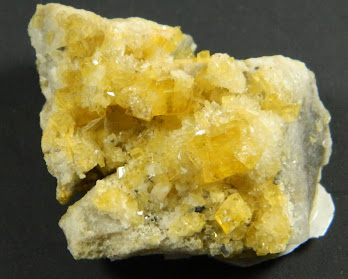 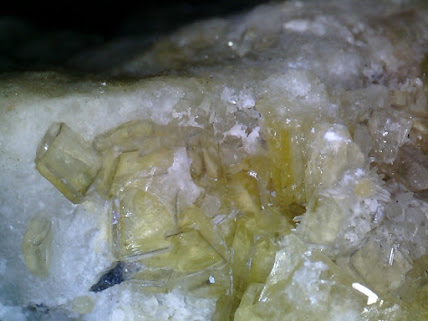 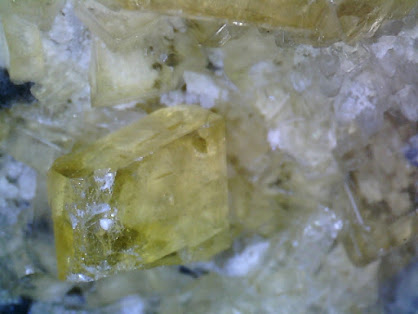 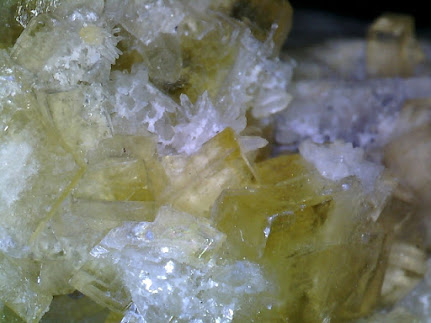 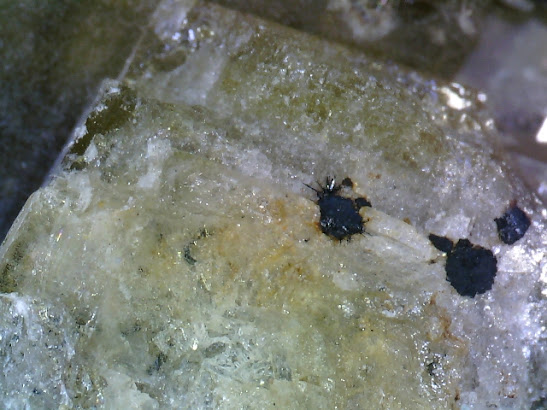 The Hilltop Mine at 12,900 is even higher that the Sherman Tunnel Mine and is perched on the divide between Sherman and Sheridan. The production, again from the Leadville Limestone, was about 8,000,000 oz of silver, plus unknown amounts of lead, zinc, gold, and copper (Bloom, 1965).  Abandoned buildings at the Hilltop attract visitors hiking to both Sherman and Sheridan visit the Four Mile route. 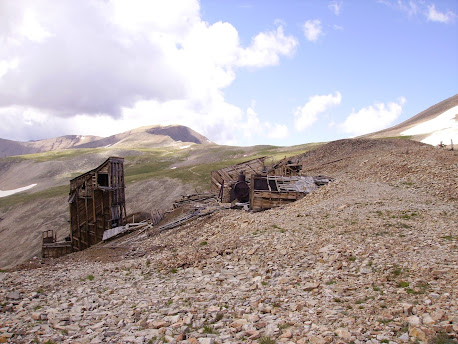 Remnants of the Hilltop Mine.

Mt, Sherman in middle of photo, H is location of Hilltop Mine, S marks Mt. Sheridan, X is the Mt. Sherman Tunnel Mine at the top of the glacial cirque known as the Iowa Amphitheater, while the arrow marks the journey up Iowa Gulch.  This is a screen shot From Google Earth. 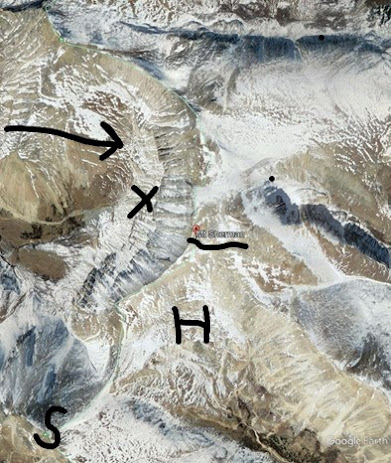