COLORADOITE, STEGOSAURUS, AND THE COMPROMISE OF 1877 + SILVER DOLLARS

In 1961 Edwin B. Eckel of the USGS, after 30 years of work, authored Bulletin 1114, Minerals of Colorado: A 100 Year Record.  The Bulletin was a major contribution to understanding mineral resources of Colorado and was popular with both amateur rockhounds and professional geologists.  On pages 6-7 Eckel noted that “during the past 100 years Colorado has given 42, new, or type, minerals to the science of mineralogy. [In addition, there are] 22 Colorado minerals that were first described as new but whose validity as species has since been discredited.”

The earliest record in Eckel’s Type list is from 1874 when Genth (1874) described schirmerite, a silver-lead-bismuth sulfide, from the Geneva District located about two miles southeast of the mining community of Montezuma (located a few miles east of the Keystone Ski Resort). The next record is 1877 when Genth described the mercury telluride mineral, coloradoite, from Boulder County.

Ah, 1877 was an interesting year and earlier this winter I had been reading about the Compromise of 1877 ( as a history buff bored in the pandemic I locate and read about all sorts of trivial “happenings”).  However, suddenly the Compromise was seemingly made relevant due to the election of 2020, at least wrongly relevant to Senator Ted Cruz (R-TX).   In the election of 1876 Samuel Tilden (D-NY) won the popular vote for president by ~250, 000 votes over Rutherford B. Hays (R-OH) and accumulated 184 votes in the electoral college.  Unfortunately for Tilden, 185 electoral votes were needed for victory (Hays garnered 165 electoral votes).  Republicans claimed voter fraud (nothing new in 2020) and Louisiana, South Carolina, and Florida, states still saddled with Reconstruction-era governments in power, sent in two conflicting sets of electoral votes---what to do?  Well, Congress formed a Commission and was in discussion when Republican minions of Hayes secretly negotiated a “compromise” with southern Democrats of the three contested states to throw their support, and 20 electoral votes, to Hayes (originally the Democrats had supported Tilden) allowing him to reach the magic number of 185.  In return for their support, Hayes essentially gave away the store by withdrawing all Federal troops from the southern states and ending Reconstruction.  In doing so he abandoned the freed slaves and ushered in the ear of Jim Crow laws.  In short order, state governments in the southern states stopped enforcing the 14th Amendment (Black Citizenship), the 15th (right to vote), and the Civil Rights Act of 1866.  The U.S. is still trying to come to terms with the Compromise of 1877.  Meanwhile in Colorado, Leadville was booming and was “founded” by mine owners Horace Tabor and August Meyer in 1877.  In Morrison, Colorado, on the eastern front of the Rockies, one of the world’s best-known dinosaurs, Stegosaurus, was discovered in the Jurassic Morrison Formation.  In August 1876 Colorado had become the 38th state and so the November presidential election was their first--but not really for the general population!  In those days of old, the Colorado General Assembly picked the three presidential electors and awarded their three votes to Rutherford B. Hayes. This was the final time in U.S history that any state awarded electoral votes without the candidate winning the popular vote.  So, in a way, Colorado had a giant voice in electing Hayes for if our statehood had come four or more months later those three electoral votes would not have been available.  I suppose Tilden would have become President and our country would have changed.  One can only speculate “how.” As for Senator Cruz, he needed to study history.  The 1877 Commission was formed since the electoral vote had not been formally certified by all states—at least there were conflicting sets of “certified” electors submitted to Congress.  In 2020, all electoral votes submitted to Congress had been certified by every state—end of debate.  Finis.

Eckel’s Bulletin was such a popular read that various members of the Friends of Mineralogy, Colorado Chapter, and the Denver Museum of Natural History (now Nature and Science), spent 20 years updating the book and published, in 1997, a 665-page tome entitled Minerals of Colorado.  Eckel provided information on 445 Colorado minerals while the revision described 774 Colorado minerals.  While Eckel described 42 Tyle Minerals from Colorado I counted 66 Types listed in the revised book.  I do not have appropriate information to speculate on new Types that Colorado may have produced since 1997.

The element tellurium is a silver-white metalloid (possesses properties of both metals and non-metals) with the symbol Te and the atomic number of 52 (number of protons in the nucleus of the atom). Tellurium exhibits oxidation states of 6+, 5+, 4+, 3+, 2+. 1+, 1-, 2-; however, only 6+, 4+ and 2- are stable. Tellurium can act as a cation with a 4+ oxidation state (IV) (a tellurite) as in the uncommon mineral tellurite, TeO2 (described May 30, 2020), or with a 6+ oxidation state (VI) (a tellurate) as in jensenite, Cu3TeO6-2H2O.   The telluride anion with a charge of 2- often combines with gold and silver cations in the minerals calaverite (AuTe2) and sylvanite (AuAgTe4); both minerals form major gold ores at Cripple Creek, Colorado (sylvanite described October 25, 2020). Coloradoite is an uncommon telluride where tellurium (2- oxidation state) combines with mercury (2+ oxidation state) and the result is HgTe.

Genth (1877) named coloradoite for the State as he described the Type Specimens from the Smuggler, Keystone, and Mountain Lion Mines in gold mining districts west and northwest of Boulder.  However, in Colorado the largest concentrations (and I use that term loosely) seem to be in the San Juan Mountains. My small specimen came from the Bessie G Mine in the La Plata Mountains, a subrange of the San Juans located northwest of Durango.  As with many tellurium minerals, I remain somewhat confused (easy for me) to fully understand coloradoite.  Most specimens are exceedingly small (millimeters) in size and are intermixed with other tellurium, gold, and silver minerals.  I certainly do not have the determinative mineralogical skills, nor the electronic gizmos, to help with sorting out the different minerals. But, as T.S. Elliot noted, if you aren't in over your head, how do you know how tall you are? 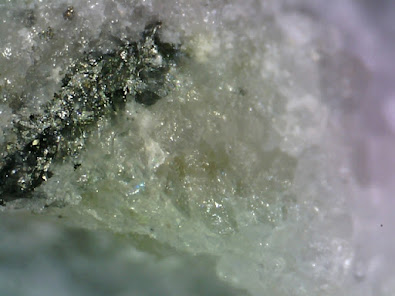 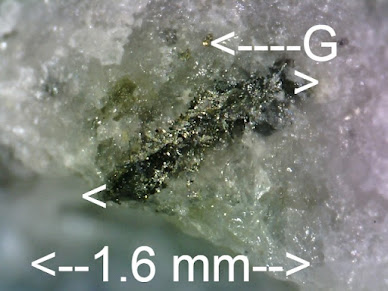 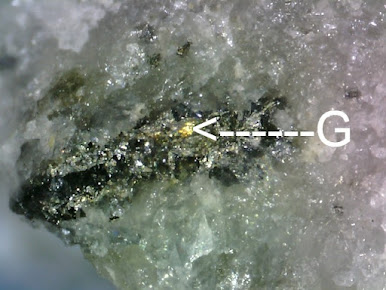 A mixture of telluride minerals, silver shiny plus black, with gold in a quartz matrix from the Bessie G Mine.  The black mineral is probably coloradite while the silver my be coloradite or another telluride.  There is also free gold in the quartz noted in middle photomicrograph.  The length <---> of the telluride  exposure is ~1.6 mm.


Vogel and Gonzales (2014) did note that the mines in the La Platas are associated with several laccolithic complexes that are Laramide in age, ~70 Ma. The mining district is well known for vein and replacement epithermal (shallow thermal deposits associated with hot fluids) gold-silver deposits that form in association with telluride minerals.  Besides coloradoite, the Bessie G has produced the tellurium minerals alaite, calaverite, hessite, krennerite, magnolite, petzite, sylvanite, and stützite. Coloradoite is soft (~2.5 Mohs), has a metallic luster, is black to gray black in color, has a black streak. Specimens are usually granular to massive with crystals indistinguishable.

As another little bit of trivia, Colorado mining interests probably wished they could has rescinded their electoral votes for Hayes. During Grant's term in 1873, Congress removed the use of silver dollars as authorized coins (Coinage Act of 1873).  Of course this action aggravated, well actually more than aggravation, silver miners and the mining companies. They certainly wanted to mine and sell more silver!  Enter the Bland-Allison Act of 1878 that required the U.S. Government to purchase between two million and four million dollars of silver each month from mines in the western states and then mint the bullion into spendable silver dollars.  Well, Hayes vetoed the the bill (another aggravation) but his veto was overridden and the Act became law.  That really was not much silver and the western miners continued to complain until the Silver Purchase Act of 1890 (Sherman Silver Purchase Act of 1890) required the Government to purchase an additional 4.5 million ounces of silver each month.  Sounds good for the mining companies but not so good for the Government.  This monthly purchase was financed by the special issue of Treasury Notes that could be purchased and then redeemed for either gold or silver--do you see a big problem brewing?  The silver currency was vastly overvalued and investors purchased silver and traded it for the undervalued gold and then sold the gold on the commodity market for big profits.  Finally the Treasury essentially ran out of gold and President Grover Cleveland got the Act repealed in 1893.  Sounds like a good deal to me--the price of silver in 1892-1893 was between $.60-.70 per ounce while gold ranged between $18-19. Ain't some trivia fascinating?  A good stress reducer!

Sometimes the best thing you can do is not think. Not obsess. Just breathe and have faith that all will work out for the best.

GET HAPPINESS FREEBIES!
Posted by Mike at 9:36 PM