The previous posting described, sort of, a few sodium-rich minerals from the Poudrette Quarry located on Mont Saint-Hilaire near Montreal Canada.  The area has some very uncommon alkaline-rich igneous rocks that produce a suite of very rare to uncommon minerals. Since I am working with purchased and gifted micromounts, the mineral crystals in the mounts are quite small (many less than one millimeter) and often (most of the time) very difficult for me to identify; however, I am giving it my best to understand as much as possible.

In youth we learn; in age we understand. Marie von Ebner-Eschenbach

Lorenzenite is a sodium titanium silicate [Na2Ti2(Si2O6)O3] that is usually associated with alkaline magmatic or pegmatitic rocks rich in nepheline and deficient in quartz. The Type Locality of lorenzenite is not at Mont Saint-Hilaire but at another famous outcrop of nepheline syenite pegmatite, the Narssârssuk pegmatite, Narsaarsuk Plateau, Igaliku, Kujalleq, Greenland.  As at Mont Saint-Hilaire, the Greenland pegmatite has produced a number (13) of Type Locality minerals rich in sodium (including elpidite described in the previous posting). I find it interesting that MinDat does not have a photograph of lorenzenite from its Type Locality.

Lorenzenite from the Poudrette Quarry usually appears as acicular needle-like crystals often in sprays (seems to be an atypical habit).  Most are relatively colorless and are transparent to translucent.  However, these Canadian crystals are completely different from large equant and opaque crystals appearing in various darker shades of brown, mauve, blue, and black from localities in the Kola Peninsula in Russia (825 minerals and 248 Types; see posting Nov. 24, 2019) .  Lorenzenite has a hardness of ~6.0 (Mohs) with Poudrette crystals being vitreous to subvitreous while Russian specimens are dull to submetallic.  Poudrette crystals fluoresce a pale yellow to dull green under short-wave ultraviolet light and was a big help in identifying crystals on my specimen. 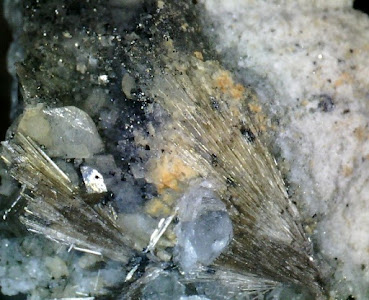 Sprays of lorenzenite with a variety of other minerals that remain beyond my reach of identification.  The scattered black crystals in the upper left are submillimeter crystals of anatase, a titanium oxide. Width FOV ~1.0 cm. 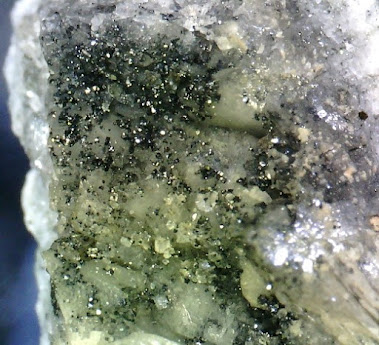 Scattered anatase crystals as noted above. 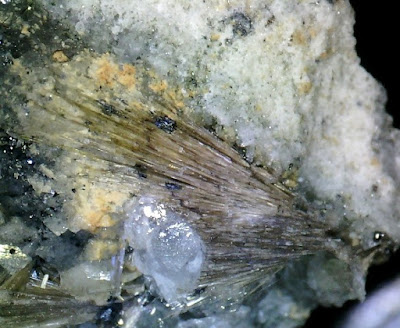 An enlargement of lorenzenite from above photomicrograph.


Polylithionite is a member of the “Mica Group” and more specifically the Trioctahedral Micas, a family that includes minerals such ass biotite, lepidolite, zinnwaldite, and phlogopite—all silicates where the major cations are potassium or sodium, plus aluminum, magnesium, lithium, iron and perhaps a few others. Polylithionite is a potassium lithium-rich mica [KLi2(Si4O10)(F,OH)2]: Poly=many, Lith=lithium, so much lithium. It is found in alkaline igneous rocks with the mineral Type Locality in a pegmatite exposure, the Ilímaussaq complex, Kujalleq, Greenland (with 11Type Minerals).

Polylithionite crystals show a hexagonal outline and appear to be hexagonal crystals composed of stacked sheets (perfect basal cleavage).  However, they are actually pseudo hexagonal crystals that are colorless, white, gray, violet, or pinkish. All colors are transparent, soft (Mohs 2-3) and have a pearly luster with a white streak. The crystals, mostly tabular, also fluoresce yellow. There is a solid solution relationship between polylithionite, lepidolite, and trilithionite (minerals are determined by the lithium-aluminum ratio). 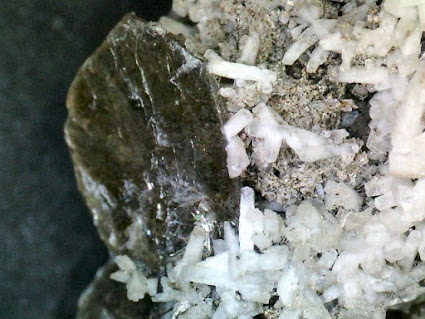 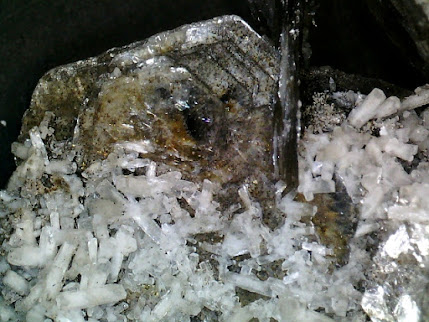 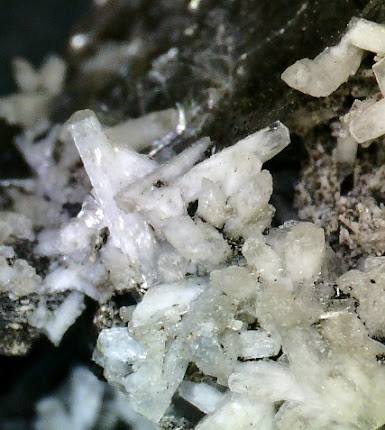 Glassy translucent to transparent prismatic crystals of natrolite, some with shallow pyramidal termination. The longest crystals are ~3 mm.


Another sodium aluminum silicate, natrolite, shares my thumbnail  specimen with polylithionite.  Natrolite [Na2Al2Si3O10-2H2O] is a zeolite and more often is found in miarolitic cavities of basalt.  It is related to scolecite (calcium aluminum silicate) and mesolite (sodium calcium silicate) and very difficult for an ole duffer like me to distinguish. Most natrolite specimens for sale at mineral shows or exhibited in museums are long, slender, prismatic, vitreous crystals up to a meter in length.  The Poudrette natrolite crystals are “square shaped along the long C-Axis”, “short” (squat) prismatic crystals rather than needle-like. They have a very shallow pyramidal termination, are translucent to transparent with a measured hardness of ~5.0-5.5. Colors of all crystals range from colorless, white, gray, even to colorful shades of orange, pink, brown to green. As for the environment of formation, MinDat.org states: “[Natrolite crystals] characteristically [are] found in low temperature hydrothermal systems, especially in volcanic and volcanically-derived rocks, but also in a wide range of other rock types, typically feldspathic [like the nepheline syenite found at Mont Saint-Hilaire].” At any rate, the specimen is quite interesting and likely contains other minerals that I cannot identify—above my pay grade.

There is no end to education. It is not that you read a book, pass an examination, and finish with education. The whole of life, from the moment you are born to the moment you die, is a process of learning.          Jiddu Krishnamurti

I have a third specimen labeled serandite which is a sodium manganese silicate [NaMn2Si3O8(OH)].  Mont Saint-Hilaire is famous for producing salmon-orange to salmon-red crystals of serandite with the color, due to manganese, making the mineral somewhat easy to identify.  However, some serandite crystals tend toward brown to pink to colorless and there is a good possibility that the pink crystals are schizolite (sodium calcium manganese silicate). In addition, most of the Poudrette crystals are long prismatic and sometimes bladed.  I studied my thumbnail for what seem like hours trying to locate the distinctive deep salmon-red, long crystals I had seen in professional exhibits—no luck.  In digging into the literature, and examining many photographs, I discovered that some serandite crystals are short, blocky. prismatic crystals, sometimes colorless to light peach/salmon. In opening my mind, I soon “discovered” a nice grouping on my specimen. Serandite crystals are transparent to translucent, have a vitreous to greasy luster, a white streak, and a hardness of 5.0-5.5 (Mohs).  At Mont Saint-Hilaire serandite crystals are found in a sodalite syenite pegmatite composed mainly of microcline, sodalite, and nepheline (Lacroix, 1931in Tarassoff and Horvath, 2019).   For a great history and description of serandite see the Tarassoff and Horvath article. 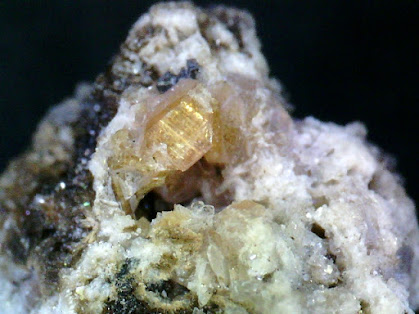 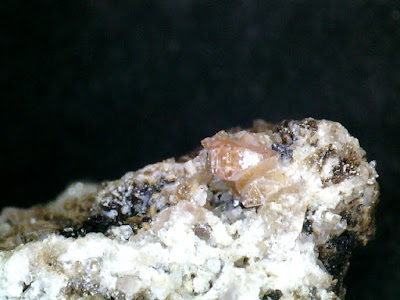 These light peach/salmon crystals are my identification of serandite. I could be wrong.  The longest dimension of any of the crystals is ~ 2mm.

The joy of life comes from our encounters with new experiences, and hence there is no greater joy than to have an endlessly changing horizon, for each day to have a new and different sun.            Christopher McCandless

This has been a tedious exercise for me.  I am not a mineralogist, the minerals are tiny and numerous from Mont Saint-Hilaire, most are unfamiliar to me, my digital camera ate several photomicrographs (about 3 times), and I miss my desk computer (this has been completed on a laptop).  But right or wrong the editor said it is going to press!  And the sun is shining, I am safe and well, and my entire family has now received at least the first vax.

The search for knowledge is a long and difficult task.    Fabiola Gianotti